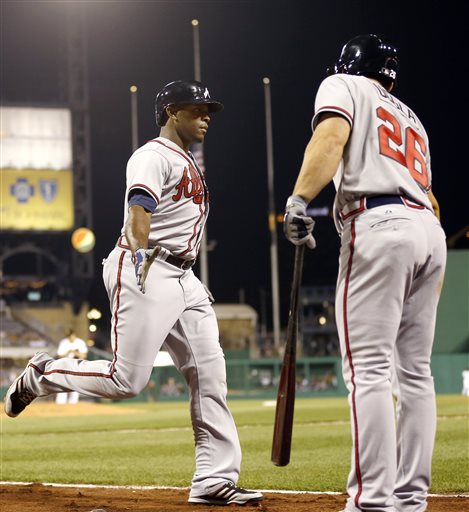 The Pittsburgh Pirates opened up a four game series with the Atlanta Braves on Thursday night.  The Braves have started the year as the hottest team in Major League Baseball and it was going to take a solid effort by the Buccos in order to pull off a win tonight.

The pitching had a rough night for Pittsburgh tonight.  Jeff Locke would only last 4.2 innings allowing four runs on six hits, with three strikeouts and four walks.  The four runs that scored came on three home runs, which is never a good sign for a starter.

Atlanta starter Jeff Teheran had a rough outing as well.  He would go five innings allowing four runs on seven hits while walking four and striking out three.  Teheran allowed two homers on the night.  The first was a solo shot by Russell Martin in the second inning.  The next was another solo dinger, this one by Pedro Alvarez.  Pittsburgh collected their other two runs when Garrett Jones hit a sacrifice fly in the first inning to score Travis Snider and then in the fifth when Jones hit an RBI double that plated Sinder.

The Braves bested the Buccos in the eighth inning when with Jared Hughes on the mound Evan Gattis hit one over the fence into left field that gave Atlanta a 6-4 lead that would hold over the next two innings.  The player who would most like to forget this game has to be Starling Marte who finished 0-5 with five strikeouts.

Game two of this four game series will be tomorrow night at PNC Park.  Wandy Rodriguez makes his first start since coming out of a game in Arizona with hamstring tightness.  His mound opponent will be Tim Hudson.  First pitch is scheduled for 7:05pm