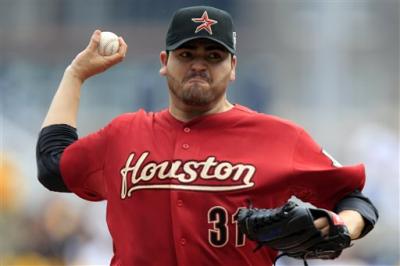 Jeff Locke made the start for Pittsburgh and did an ok job through the first four innings.  He gave up one run on three hits in the first inning.  The one run came on a controversial safe call at second when a runner went out of the baseline to avoid the tag.  A second run would score in the third on a diving ground out to shortstop Clint Barmes.  The fifth inning saw Locke get hit hard, with one out, two straight singles were followed by a three run homer by Brett Wallace.  This basically put it into everyones mind that the day was over for the Pirates.

The bats were silenced by Stros starter Edgar Gonzalez who spent most of the year in the Mexican League and won his first game of the year today.  The Buccos had their chances but, were only able to collect one run.  That run came in the fifth when Barmes hit a one out single to right field that scored Pedro Alvarez, who led the inning off with a triple.

The Bucco bullpen pitched four shut out innings today, but when your team is down fours with no offensive output, does it really matter?  The offensive woes consisted of only five hits, leaving five men on base, and a woeful 1-7 with runners in scoring position.

Towards the end of August when Pittsburgh was caught up in their worst month of the season, my expectations went from playoffs, to winning 82 games.  After today’s loss, I am starting to doubt this team can even do that.  They just look unmotivated on the field, which is awful considering how close they are to changing the mentality of baseball in western Pennsylvania.

Game two of this three game series will take place tomorrow night at 7:05.  Wandy Rodriguez will face his former mates, while his mound opponent will be Jordan Lyles.  Let’s hope that the Pirates offense doesn’t make this guy look like another Cy Young candidate.