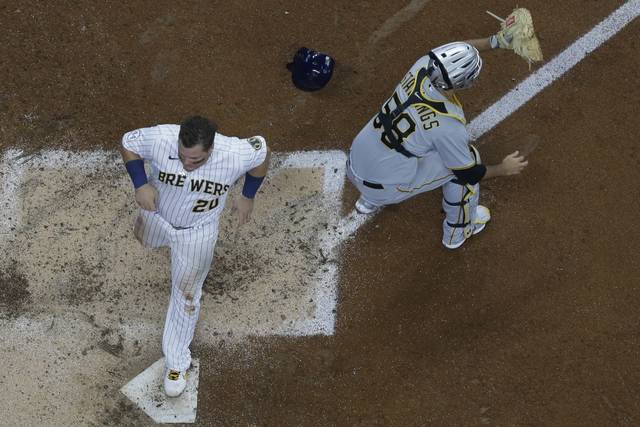 Another day, another loss.  This seems to be a common thread for the 2021 Pittsburgh Pirates. With a 7-4 loss to the Milwaukee Brewers Saturday afternoon, Pittsburgh has dropped six straight games.  This is the third time that the Pirates have lost six straight games, none of those streaks reached seven.  While one can’t be frustrated by the team losing, since we all expected it this year, it is tough to watch day in and day out.

Pittsburgh came out of the gate to grab a four-run lead through the top of the second.  It started in the first when Adam Frazier and Phillip Evans scored on a Corbin Burnes throwing error to first base.  The Pirates were able to add another run that inning when Jacob Stallings hit into a double play.  Pittsburgh would sadly score their final run in the second inning when Ka’ai Tom hit an RBI triple to right.

Chad Kuhl made the start today and could not make it past the fourth inning.  He would throw 3.1 innings allowing six runs, five earned, on five hits.  Kuhl would also put four runners on via walk to go with two strikeouts.  Milwaukee starter Burnes helped his own cause with an RBI infield single in the second inning.  Another run would score in the third on an Omar Narvaez single to right center that plated Christian Yelich.

The Brewers put away the game in the fourth inning with five runs.  Yelich got things started with a bases loaded clearing double to left.  He would then come in to score when Willy Adames hit a ground rule double to right center.  The final run of the night came when Adames scored on a Narvaez single to right center.

The Pirates had a good chance to get back into this game during the fifth inning.  They would load the bases with no outs, but the next three batters would all strikeout and come away with nothing.  The Pittsburgh bullpen was heavily used again as four pitchers would cover the final 4.2 innings.  The pen hasn’t been as solid of late, but it is clear that with starters struggling to go deep into games that they are being overworked.

This three-game series will wrap up tomorrow afternoon and the Pirates hope to avoid being swept for the seventh time this season.  With Mitch Keller finally being sent down to AAA to work on his control, Wil Crowe will make the start tomorrow.  Milwaukee will counter with Adrian Houser.  First pitch is set for 2:10pm.