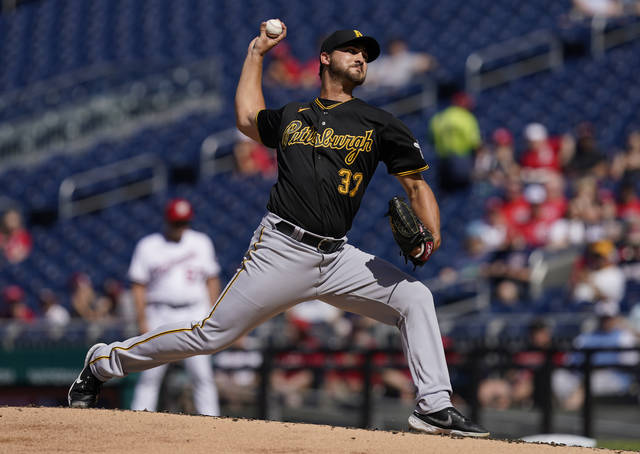 The road was not kind to the Pittsburgh Pirates.  Last Friday they would begin a six-game road trip, and today they wrapped it up with a 3-1 loss to the Washington Nationals.  Washington would complete their three-game sweep and in the process, Pittsburgh would lose all six of their games on this trip.  Sadly, things could get a lot worse before they get better.

The scoring started for this game in the bottom of the second when Yan Gomes hit a 390 ft. solo home run to left field.  The Nationals would add two more runs in the seventh when former Bucco Josh Bell smacked a 380 ft. two run home run to right center.  The Pirates finally got on the board in the eighth when Bryan Reynolds drove home Ke’Bryan Hayes on an RBI single to left center.

Derek Shelton would continue his strange tradition of pulling starters early by having Chase De Jong lifted after just four innings pitched.  During those four innings he would throw 71 pitches and allow one run on four hits with five strikeouts and two walks.  Paolo Espino pitched five innings for Washington and in that time gave up just three hits with two strikeouts.

Aside from David Bednar giving up that two-run home run to Bell in the seventh, the bullpen was serviceable.  Chasen Shreve allowed just one hit in his lone inning of work.  Chris Stratton would come in during the sixth striking out one batter, while walking two.  Bednar struck out two, to go with two hits in the seventh.  Since Pittsburgh hasn’t had a save opportunity in almost two weeks, Richard Rodriguez got some work out of the pen in the eighth.

What is there to say at this point?  The Pirates continue to find ways to lose games.  One night it is a lack of runs, another night it is a bad start, and another night it is a poor performance from the bullpen.  Whatever it is, at least Pittsburgh can not lose on Thursday, since it is an off day.  After that they will welcome the Cleveland Indians to PNC Park for a three-game weekend interleague series.