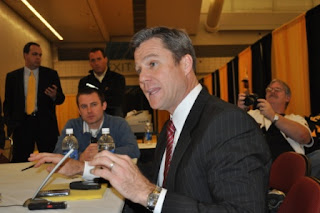 While all Pirates’ fans feared this was true, we certainly didn’t expect for it to be admitted openly in passing during an interview.
In an interview with piratesprospects.com, Pirates’ President Frank Coonelly was asked if the team would be able to afford a $70 million-$80 million payroll, in present-day worth, if this current group of players were competitive enough to merit additional outside free agents.
Here was Coonelly’s response:
“Today, no, but we will be able to support that payroll very soon if our fans believe that we now have a group of players in and on its way here in the near future that is competitive.  We need to take a meaningful step forward in terms of attendance to reach that payroll number while continuing to invest heavily in our future, but I am convinced that the attendance will move quickly once we convince our fans that we are on the right track.”
This is incredible…almost unbelievable.  Pirates’ fans have wanted to know the answer to this question for years.  Will ownership upgrade payroll to support a winning team?  Pirates’ management has neglected to respond to questions similar to this over the years, including Coonelly as well as owner Bob Nutting.  Finally, fans got an answer from the Buccos’ President…and it’s utterly disappointing.
James Krug of isports.com had a response to Coonelly’s statement that accurately puts the situation into an appropriate perspective:
“Sadly, Coonelly does not place the immediate onus on the Pirates themselves to build a better, more competitive team that fans would WANT to see.  Rather, as he has been a consistent message from Pirates’ ownership, they desire to see a significant increase in attendance PRIOR to the team actually getting good!  It’s maddening.  From a purely business perspective, it is a backwards approach.  You could liken it to a car company telling its customers:
‘We really want to build better cars for you.  But before we do, we need you to start buying our lower-quality, underperforming cars in a much higher volume.’”
Major League Baseball is a multi-million dollar business.  Many aspects of corporate businesses are highly complex, but appeasing a fan base is not.  Offer the fans a consistently competitive team, and they will be in their seats come first pitch.  This is especially true for fans, a die-hard, loyal group of sports-lovers who will follow their team to the end, as long as the feeling is mutual.  With comments like this from the Pirates’ president, it appears as though there’s no such relationship.
Coonelly has basically said that the team’s payroll, which is usually at or near the bottom among the 30 MLB franchises, will remain there until more fans start coming to games.  Instead of being grateful for the fine support fans give the worst team in baseball, Coonelly is telling them they need to do more.  If they don’t, the not-so subtle message is that there will be more years of low payrolls and more-than-likely, losing teams.
Pirates’ fans don’t need to show their loyalty to the team by showing up to baseball games.  The ownership and management of the Pirates need to show their respect and appreciation for the fans by giving them a competitive team to cheer for on a consistent basis.
Have an opinion on the article?  Send us an email at fansfromthestands@yahoo.com and let us know what you think!
And…
As Always…
Let’s Go Bucs!