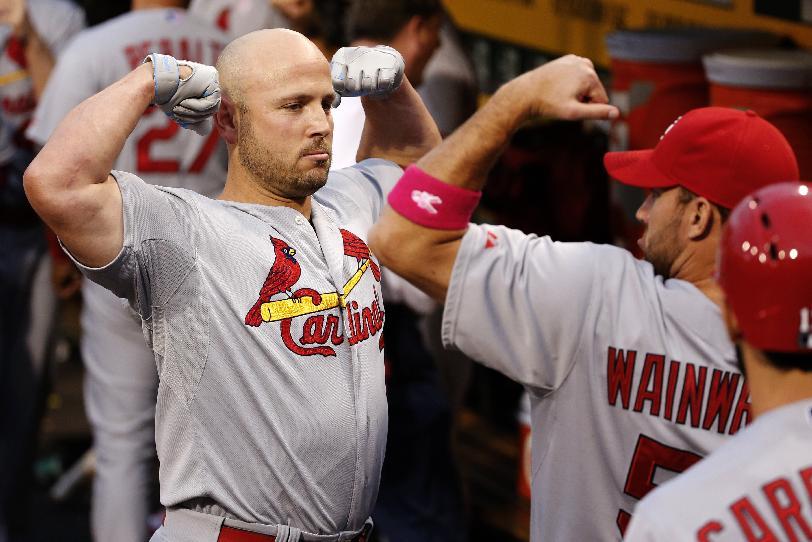 As any baseball fan can attest, it’s difficult to beat a team three times in a row.  Even in games like tonight for the Pittsburgh Pirates, who had golden opportunities to take the lead down to the very last out, but came up short against the St. Louis Cardinals.

The Cardinals scored four runs in the 1st inning and two in the eighth to hang on to a 6-5 victory, avoiding a series sweep by the Pirates at PNC Park.

Things couldn’t have started off any worse for Charlie Morton and the Pirates tonight.  St. Louis scored four runs in the first inning, thanks, in large part, to a Pedro Alvarez throwing error, and it looked as though the rout may be on in front of a national spotlight on ESPN.  Allen Craig’s RBI single scored Jhonny Peralta, and Yadier Molina’s base hit scored Matt Holliday to make it 2-0.  After Matt Adams’ sacrifice fly scored Craig, Mark Ellis singled home Molina and the Cards were in control.

The Bucs cut the lead in half in the fourth inning on a two run homerun by Jordy Mercer, scoring Ike Davis.  They added another run in the seventh inning on an RBI single by Alvarez.

St. Louis added a pair of runs in the eighth, which ended up being the difference in the game.  Peter Bourjos singled to shallow right, scoring Adams.  The winning run, frustratingly, came as Jon Jay scored on a wild pitch.

The Bucs scored a run in the eighth and a run in the ninth, but things could have been much better for the home team.  Tony Sanchez’s ground out in the eighth scored Davis to cut the lead to 6-4.  Then, with the meat of the order up in the ninth, the Pirates put themselves in an ideal position to win this game.  Neil Walker led off with a double, and scored on Andrew McCutchen’s single.  Alvarez singled, and Clint Barmes walked, loading the bases with no outs.  The Pirates wouldn’t score.

Davis hit a first pitch pop up to first base, and Mercer grounded into a game-ending double play to end the threat – Cardinals won 6-5.

Morton took the loss tonight, but didn’t pitch horribly.  He gave up four runs, only one of them earned, on seven hits through six innings of work.  He fell to 0-5 on the season, despite lowering his ERA to 3.22.

This was obviously a frustrating way to end this series and the home stand for the Pirates.  But still, this was a very productive and positive weekend.  The Pirates won their third straight series and wrap up the home stand with a 6-3 record.

After a day off tomorrow, the Bucs will travel to a place we all hate here in Pittsburgh – Miller Park.  They’ll kick off a three game series against the Milwaukee Brewers.