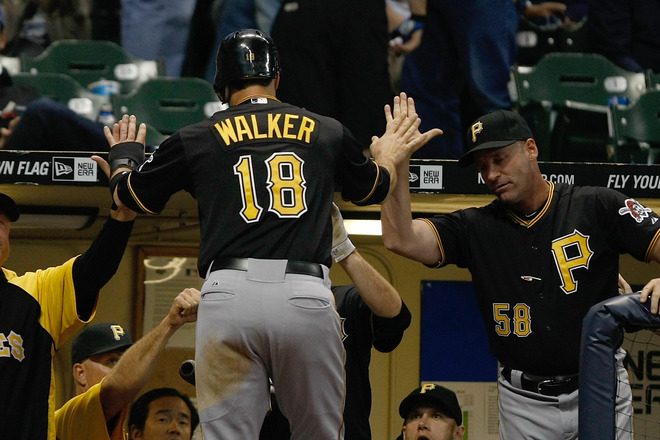 Following an impressive 6-3 home stand, the Pirates jumped on the road to continue their current stretch of games against N.L. Central opponents.  Tonight began a three-game series against the Milwaukee Brewers, a team that has owned the Pirates in recent memory.  To make things worse, the Brew-Crew are playing the best baseball of their season thus far, coming off a four game series sweep of the Los Angeles Dodgers.  True, the Pirates were at .500 entering tonight, but tonight was still the start of a nerve-wracking weekend.

Kevin Correia pitched a solid outing, while the offense came alive, using a six-run third inning on their way to an 8-2 victory over the Brewers atMillerPark.

The Bucs used a total of six pitchers to limit the Brewers to two runs on seven hits.  Correia gave up both runs, two homeruns to Nyjer Morgan and Corey Hart, while surrendering just three other hits through his 5.2 innings of work.  The bullpen, as it’s been all year, was phenomenal tonight, giving up just two hits over the final 3+ innings.  Doug Slaten, Jared Hughes, Brad Lincoln, Tony Watson, and Juan Cruz combined to toss scoreless baseball against one of the hottest hitting teams in the league right now.

Offensively, it was incredibly exciting to see the Bucs have a breakout inning.  That came in the third frame, where they tallied six runs, which ended up being the difference in the game.  After back to back triples by Josh Harrison and Andrew McCutchen tied the game 1-1, the Bucs got three straight singles by Neil Walker, Matt Hague, and Rod Barajas.  After loading the bases later in the inning, Jose Tabata crushed a three-run double over Morgan’s head that the Brewers’ centerfielder clearly misread.  This was the key play that broke the game wide open, and it turned out to be too much for the Brewers to overcome.

Was this an offensive breakthrough for the Bucs?  Well, let’s not get carried away.  It is only one game, but it was still exciting to see.  Tabata and McCutchen each had two hits and three RBI’s, while Walker, Hague, and Barajas each had a pair of hits as well.  Pedro Alvarez didn’t get into the hit column tonight, though, going 0-5 with two striekouts and four runners left on base, dropping his average to .199.

Ryan Braun left the game tonight in the eighth inning with a right hip strain, while Rickie Weeks was a last-minute scratch because of an illness.

This was a great way to start the road trip for the Bucs, winning a game against an N.L. Central foe that has owned them in recent years.  The Pirates are just three games back of the division-leading Cincinnati Reds, who they’ll play following this weekend’s series inMilwaukee.

The Pirates are in prime position to at the very least, win this series from the Brewers.  The two teams will face off again tomorrow night, with Erik Bedard taking the mound for the Bucs against Shaun Marcum.