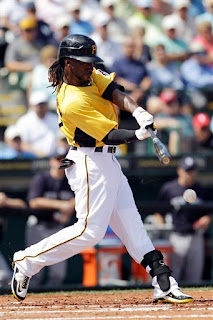 Just yesterday, on the first of two off days during Spring Training, I was commenting that the Pirates’ starting pitching has been pretty solid thus far. With the injury to A.J. Burnett, the rotation appears to be fairly set and will most likely include Erik Bedard, Charlie Morton, Jeff Karstens, Kevin Correia, and James McDonald.

Speaking of McDonald, he took the hill today as the Bucs faced the Baltimore Orioles for the second time this spring. Unfortunately for J-Mac and the Pirates, there wasn’t a single thing about his performance today that was solid…except the contact the Orioles were making off the right-hander. He was tagged for five runs on six hits through only three innings of work. He walked two, struck out two, and gave up a pair of homeruns. This wasn’t exactly what we wanted from one of our starters. Confidence is incredibly vital to a pitcher’s performance, and with outings like this, J-Mac can’t be feeling too good about his stuff at this point.

Joel Hanrahan pitched an inning of scoreless ball for the Bucs. After surrendering a leadoff walk, Joel set down the next three hitters consecutively, including two strikeouts. He looks solid off his N.L. All Star season last year. Tim Wood, who is one out of what seems to be a million relievers vying for a spot in the bullpen, pitched a scoreless inning today, as did Evan Meek and Jason Grilli.

Without a doubt, though, the Pirates’ offense stole the headlines in their 11-5 victory over Baltimore today. Just as they did the last time they faced the Orioles, the Bucs lit up the scoreboard, pounding the baseball up and down the lineup. Alex Presley, Neil Walker, Josh Harrison and Garrett Jones each had two hits, while Presley, along with Clint Barmes and Harrison, had two RBI’s a piece. Pedro Alvarez, who will be a focal point for me all season long, had a single and a sacrifice fly. He continues to look confident at the plate, and his first-pitch attack looks to be paying off early on this spring. It was a total team effort at the plate this afternoon….adding up for a total of 11 runs on 15 hits. Wow! There’s the offense we need!

With the victory, the Pirates improved their Grapefruit League record to 4-7, two of those wins coming against Baltimore. It was great to see the bats come alive.

On a side note, Rod Barajas was scratched from today’s lineup, as his wife gave birth to their seventh child. Seven children! I have nothing else to say but congratulations. Michael McKenry took his place in the lineup today.

The Pirates will face the Minnesota Twins tomorrow afternoon at 1:05pm.