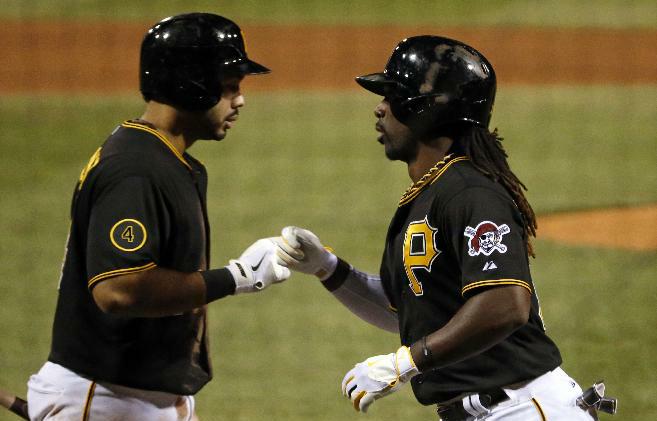 After a couple ugly losses the past two days, the Pittsburgh Pirates were in need of a spark and a win. Fortunately, a late game comeback against a young Arizona Diamondbacks bullpen was just what they needed, as the Bucs rallied to a 7-4 victory at Chase Field.

With the win, the Pirates moved ahead of the St. Louis Cardinals to second place in the N.L. Central, just 2.5 games back of the division leading Milwaukee Brewers.

The Pirates had all sorts of problems against Arizona starter Vidal Nuno. But they got to the D-Backs’ bullpen, scoring six runs in the final two innings to steal the victory.

The Diamondbacks scored the game’s first run, and broke the game open, all in the fifth inning. Didi Gregorius led off with a single, and after an Andy Marte ground out, Nuno was hit by a pitch, putting runners on first and second with one out. Ender Inciarte crushed a three run homerun to deep right, putting the D-Backs up 3-0. David Peralta then walked, stole second, advanced to third on Russell Martin’s throwing error, and scored on a wild pitch. Wow. When all was said and done, Arizona had a 4-0 lead after five innings.

Pittsburgh answered with a run in the top of the sixth. Gaby Sanchez’s two out RBI single scored Jordy Mercer, who doubled earlier in the inning. Arizona’s lead was cut to 4-1 on just the third Pirates hit of the game.

Trailing by three runs in the top of the eighth, the Bucs battled back to tie the game. Andrew McCutchen’s RBI double scored Josh Harrison to cut the lead to 4-2. Then a huge two run pinch hit double by Pedro Alvarez scored McCutchen and Mercer, tying the game.

Three runs crossed the plate in the top of the ninth. Mercer’s double scored Harrison to give the Bucs the lead. Back to back RBI singles by Michael Martinez and Martin, followed by a two run single by Travis Snider, put the Bucs up 9-4, which was more than enough for Ernesto Frieri to earn seal the deal in the bottom of the inning.

This was an absolutely gigantic victory for the Pirates. After a terrible ending to their series against the San Francisco Giants and a sloppy loss last night, the Bucs were well on their way to another loss tonight. But the offense came through in a big way. These are the types of games that can change momentum for a series or even a season, which is something this team needed on this road trip.

The Pirates and Diamondbacks well face off again tomorrow night in the third game of the series. First pitch is scheduled for 8:10pm.