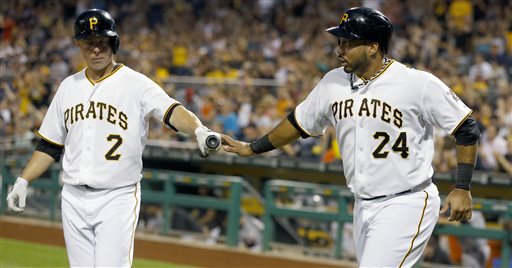 The Pittsburgh Pirates sure like the San Francisco Giants pitchers.  After scoring eight runs last night, the Buccos put up twelve on the Giants tonight and won 12-8.  In a game like this it is easy to see that neither side had very good pitching, but what impressed me about the offense was that after weeks of struggling to collect two or three runs, they were able to answer any threat of San Francisco’s.

The Giants struck in the first with a run, but Pittsburgh answered with an Andrew McCutchen double to left center.  The Pirates offense then collected three runs in the third with Cutch picking up two more RBI.  That 4-1 lead did not last long as San Fran was able to collect a run in the fourth and then two more in the fifth to tie the game.

The Buccos did not hang their heads with their lead gone.  They came out in the bottom part of the fifth and battled.  With the bases loaded, Russell Martin would ground into a fielder’s choice to score the first run of the inning.  Pedro Alvarez then doubled in a run, which was followed by Neil Walker hitting a two run single.

Francisco Liriano picked up his fifth win tonight after six innings of work.  His final line was four runs on eight hits, with three walks and two strikeouts.  While it was not his best work in a Pirates uniform, he gave his team a chance to win, and for the first time in a while the offense had his back.

The Buccos increased their lead to 10-4 in the sixth with a solo home run by Alex Presley and a Gaby Sanchez run scoring double.  The Giants would plate two more run in each the seventh and eighth, but the Pirates would score one run in the bottom part of those innings for some much needed insurance.

It is not an everyday thing to see two teams combine for twenty runs in the MLB, but it was a fun back and forth game to watch, with the best part being the Pirates winning.  The top third of the Pittsburgh lineup was on fire tonight, as Starling Marte, Jordy Mercer, and Cutch combined to go 10-15 with eight runs scored.  Hopefully the outburst by the bats the past two nights is able to keep going for a little while longer.  This series will wrap up tomorrow as Charlie Morton will make his season debut, against the Giants Matt Cain.