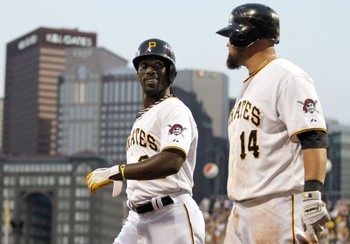 Garrett Jones and Neil Walker hit back-to-back homeruns off the right field foul pole to get the scoring started in the fourth.  Casey McGehee added a double, and scored on Clint Barmes’ RBI single, and the Bucs occupied a 4-1 lead heading into the fifth.  They would deliver the knockout punch to Lyles on a leadoff triple by Drew Sutton, who scored on Andrew McCutchen’s double.  Cutch crossed home plate on a double by Jones, who scored on McGehee’s two run double, which also drove Neil Walker home as well.  When all was said and done, the Pirates had an 8-1 lead after five innings.

The Pirates’ offense was on fire on the road last week, and they continued that trend tonight in the first of a seven game home stand.  As a team, they tallied 18 hits, including multi-hit performances by five different players.  Jones went 4-5 with a homerun, two doubles, a single, and four RBI’s, while McCutchen also had four hits and an RBI, bumping his average to .354 for the season.  Alex Presley, Walker, and Sutton had two hits tonight, while McGehee had three of his own.  The Bucs have homered in 10 straight games for the first time since 2005. It was an incredible night at the plate for the Bucs in front of a very appreciative PNC Park crowd.

And amidst the incredible offensive display tonight was James McDonald, who battled control issues early and often on his way to earning his eighth victory of the season.  J-Mac gave up two runs on four hits through seven innings.  He did walk five batters and struck out four.  But after walking three batters in the first inning, he settled down, and looked strong and confident in the sixth and seventh frames.  Jared Hughes closed things out in the final two innings.

This is an important series for the Pirates against a far inferior team like the Astros.  We, as fans, couldn’t have asked for a better start to this home stand than a huge lopsided victory.  This offense was the best in baseball in the month of June, and they have scored 16 runs through the first two games in July.  This is great to see, and the week-day crowds are PNC Park continue to grow by the day.

The Pirates and Astros will face off tomorrow night in the second game of this four-game series.  A.J. Burnett will look for his 10th victory of the season as he takes the mound against the Astros’ Lucas Harrell.