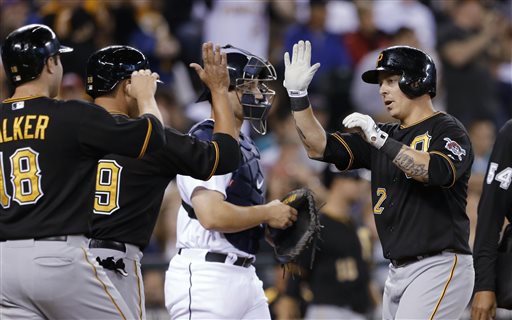 Entering this week’s short two game series against the Seattle Mariners, the Pittsburgh Pirates offense was on fire.  Led by Pedro Alvarez, Starling Marte, and Russell Martin, among others, the Bucs had been hitting the face off the baseball against the opponent.  Tonight, it was more of the same against Mariners’ starter Joe Saunders, as the Bucs used the long ball to break the game open early in a 9-4 romp at Safeco Field.

The Pirates brought their bats to Seattle, continuing their hot streak at the plate with eleven total hits, including five homeruns, two by Marte alone.  Andrew McCutchen had two hits, while Martin and Brandon Inge (no, this isn’t a typo) also had homeruns on the night.

Marte led off the game with a triple, scoring on Jordy Mercer’s groundout to second base.  Martin then led off the second inning with a solo homerun to right centerfield.  After Tony Sanchez singled and Neil Walker drew a walk, Inge hammered a three run homer over the left field fence to stretch the lead even further.  Marte added a solo shot on the very next pitch, his first of two on the night, and suddenly, Pittsburgh had a 6-0 lead.

Pittsburgh added a few more runs over the course of the game, including solo homers by Marte and Gaby Sanchez, sealing a comfortable victory over a struggling Mariners team.  Jeff Locke had control issues throughout his performance tonight, but still managed to limit damage, lasting seven innings, giving up two runs on four hits and two walks.

There’s no denying that, from the batting lineup to the starting pitching to the bullpen, the Pirates are a better baseball team than the Mariners.  The key is to be able to prove that each night.  The Bucs convincingly beat the inferior team tonight, and now have a chance to take a two-game sweep in Seattle.

As was the case in their quick two-gamer at PNC Park earlier in the year, the Bucs will have to face Mariners’ ace Felix Hernandez.  Jeanmar Gomez will move from the disabled list to the starting pitcher’s found for tomorrow’s matinee.