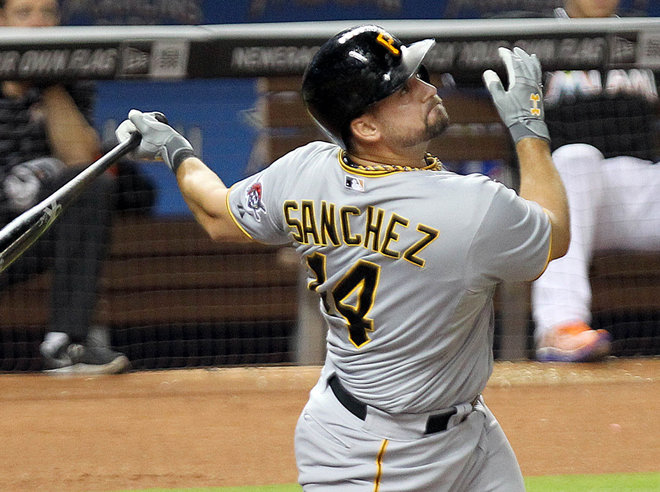 The Pittsburgh Pirates have been playing good baseball this week.  In fact, had it not been for a Bryce Harper homerun late yesterday afternoon, the Bucs would have finished off a four-game series sweep of the Washington Nationals.  But one day after they scored seven runs in our nation’s capital, the Pirates’ offense was held in check throughout the night, falling 2-0 to the Miami Marlins in the first of a three game weekend series.

Both starters, Jeff Locke for Pittsburgh and Henderson Alvarez for Miami, were effective for their teams, limiting the opposing offenses throughout.  But Locke got himself into a lot of trouble due to control issues.  In fact, he walked six batters in his 6.2 innings of work, striking out nine and giving up two runs on eight hits, losing his third game (9-3) of the season.  Alvarez was solid for Miami, giving up just two hits in six innings.

The walks finally got to Locke and the Pirates in the sixth inning.  After a pair of walks and a single loaded the bases with only one out, Placido Polanco hit a short chopper to Pedro Alvarez, but the Bucs’ third baseman was unable to do anything with the ball.  Donovan Solano crossed the plate, giving the Marlins a 1-0 lead.

Giancarlo Stanton doubled Miami’s lead the next inning, hitting his 12th homerun of the season over the fence in the seventh inning.

The Bucs tried to answer in the eighth.  Gaby Sanchez got things started with a one out, broken bat double, but pinch hitters Travis Snider and Michael McKenry were unable to get him home, and the Pirates still trailed by two runs after eight.

And the Pirates did get the tying run to the plate in the ninth and final inning.  With two outs and two strikes down, Andrew McCutchen singled to keep the Pirates alive, and Alvarez pulled a single down the line, putting runners at first and third.  Unfortunately, the Pirates’ third pinch-hitter in two innings failed, as Jose Tabata grounded out to end the game.

This was a frustrating loss for the Pirates tonight because, once again, they wasted a strong pitching performance.  The pitching only gave up two runs…which should be enough to win.  But the bats were not effective tonight, and now they will need to take two straight in Miami to clinch the series victory before heading home for the biggest series of the season to this point.