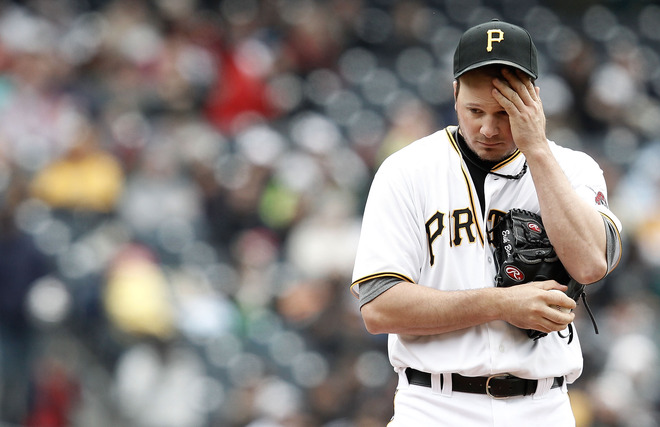 Well, another series is in the books and the story continues to be the lack of offense for the Pittsburgh Pirates.  The Bucs lost today to the St. Louis Cardinals 5-1, dropping the weekend series to their first N.L. Central opponent of this young 2012 season.

Rafael Furcal led the way for the Cardinals today with three hits, while David Freese had two RBI’s on the afternoon.

Out of everyone on the Pirates’ team, it’s tough NOT to sympathize with Erik Bedard, who made his fourth start of the season today.  The Pirates have scored a total of two runs in four games, and, despite another solid start, the left-hander fell to 0-4 on the season.  Bedard gave up three runs (two earned) on seven hits, along with four walks and seven strikeouts in seven innings of work.  Despite his 0-4 start, he has an impressive ERA of 2.62.  It must be extremely frustrating for Bedard…we all know it is for the fans.

Evan Meek took a step backwards today in his appearance in the ninth inning.  He gave up two runs on three hits, while also issuing a walk.  Chris Resop pitched a perfect eighth inning in relief as well.

But it always leads back to the offense.  The pitching continues to do its job, and the offense simply doesn’t produce.  Jose Tabata was the only Pirates’ player with a multi-hit afternoon, as the team only had six hits total today.  Andrew McCutchen, Garrett Jones, and Pedro Alvarez went a combined 0-11, while Casey McGehee had the lone RBI with his pinch-hit single in the eighth inning.

With today’s loss, the Bucs fell to 6-9 on the season, and they’ve pulled even with a .500 mark at PNC Park this year.  They’ll open up a three-game series against the Colorado Rockies starting tomorrow night.