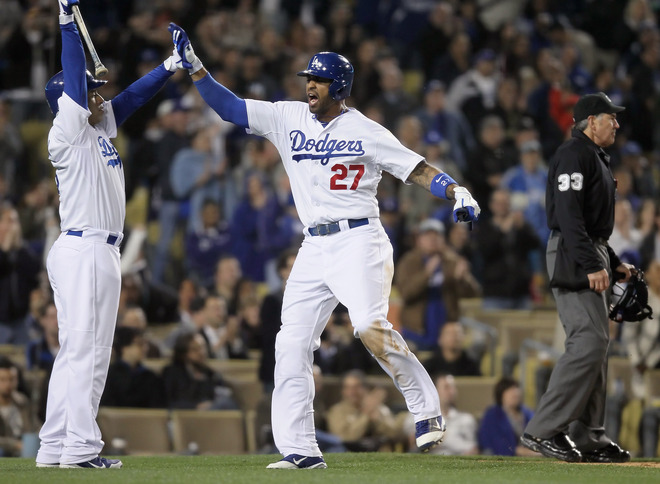 The Pirates’ struggles out west continued tonight with a 4-1 loss to the Los Angeles Dodgers in the second of a three game series.

While we only have a small sample of the 2012 season thus far, a troubling trend is developing:  the Bucs can’t score runs.

Granted, they have faced the toughest stretch of starting pitchers in the league this year.  So far, they’ve been opposed by Roy Halladay, Cliff Lee, Vance Worley, Clayton Kershaw, and tonight, Chad Billingsley.  The Pirates’ offense stumbled through six innings against Billingsley, who gave up one run on five hits in his six innings of work.  In fact, Clint Barmes’ solo homerun in the third inning was the only real damage the Bucs’ bats did all night.

Garrett Jones had a solid day at the plate, smacking a single and double in his first two at-bats.  Pedro Alvarez was 0-3 on the evening, but hit two balls very hard.  The first was a shot to the warning track in right field, and in his third at bat, he lined out on a sharply hit ball.  He did strike out once and also had a throwing error in the eighth inning.

Nate McLouth made his first start of the season for the Bucs, giving Jose Tabata a day off.  Nate had a single, as did Andrew McCutchen.  In all, the team only managed six hits.

Despite the loss tonight, this was yet another solid pitching performance from a Pirates’ starter.  Erik Bedard, in his second appearance of this young season, gave up two runs on eight hits in his five innings of work.  The Dodgers have a number of powerful dangerous hitters in their lineup, and even though he did get himself into trouble in multiple innings, Bedard was able to escape significant damage, keeping his team in the game while he was on the mound.  One thing is for sure, the way Bedard has pitched in his first two games this year, he doesn’t deserve the 0-2 record he has after the first week of the season.

One of the stories of the first series against the Philadelphia Phillies was the impressive performance of the Bucs’ bullpen.  The past two days, however, the relievers have taken a step backwards.  Tonight, Chris Resop, Tony Watson, Evan Meek, and Jared Hughes combined to give up two runs on four hits in their three innings of work.  This certainly isn’t a disaster, but when Bedard left the game, it was a one-run contest, and the bullpen gave up two more runs.  With a struggling offense like this, the relievers have to keep the game close.

But without question, the first pair of losses in this series lies on the inability of the offense to produce runs.  Granted, the opposing pitchers have been solid, but these are Major League hitters and they need to start hitting the ball.  They have scored a total of nine runs through five games.  Maybe a lack of patience at the plate is one of their problems?  After all, they’ve only drawn five walks so far this year.

The Pirates will try to avoid a sweep to the Dodgers tomorrow night as the two teams face off at 10:10pm.  Jeff Karstens will start for the Bucs against Chris Capuano.