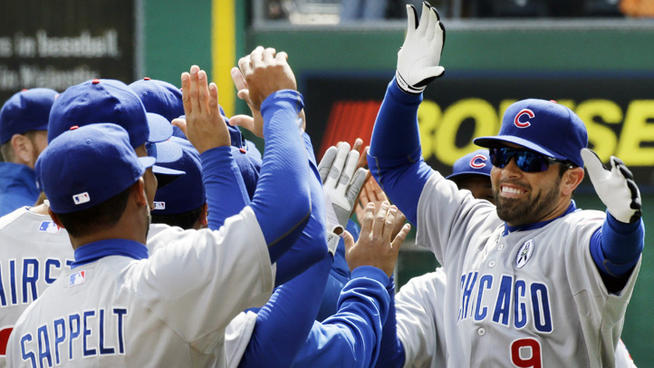 Opening Day is always a special time.  Optimism is at an all-time high, and every day, regardless of the results of the previous season and the expectations for the upcoming year, every team is on a level playing field for this one day.  The Pirates opened the 2013 this afternoon against the Chicago Cubs, a team that is expected to find themselves in the basement of the N.L. Central at season’s end.  For the Bucs, on the other hand, some feel that this team is ready to take that next step from the previous two seasons and finally become relevant in the division and league conversations.

Fans From The Stands were at the home opener this afternoon, and we gave our predictions for the game:

Unfortunately for the hometown crowd today, the Pirates’ bats were held in check throughout the day, as they lost a low-scoring game to the Cubs, 3-1, at PNC Park.

Chicago starter Jeff Samardzija pitched eight shutout innings, and the Cubs used three pitchers in the ninth inning to close out the Pirates in front of a minimally-entertained home crowd.  The Bucs only managed three hits throughout the game, including a double by Andrew McCutchen, and singles by Neil Walker and Pedro Alvarez.

After falling behind 3-0 heading into the bottom of the ninth, Alvarez’s RBI single scored McCutchen to get the Bucs on the board.  But with two outs and two runners on base, Russell Martin popped out to end the threat and the game.

A.J. Burnett kicked off his 2013 campaign with a loss, but he certainly wasn’t the main culprit in today’s defeat.  After giving up a two-run homerun to Anthony Rizzo in the first inning, he settled in and held the Cubs in check for the majority of his set.  After giving up another run in the sixth, he was pulled by manager Clint Hurdle and was treated to a surprising standing ovation from the crowd.  In all, Burnett gave up three runs on six hits with ten strikeouts and just one walk in 5.2 innings.  Justin Wilson, Jared Hughes, and Mark Melancon combined to toss 3.1 innings of scoreless, hitless baseball.

Following the game, we discussed our disappointment with the Pirates’ loss in our postgame show:

This was certainly not what we all envisioned for the home-opener at PNC Park this afternoon.  The early homerun by Rizzo seemed to drain out the cheers and intensity of the Pittsburgh crowd, and, due to the lack of offensive production from the Pirates, the energy never really rekindled.  After a day off tomorrow, the Bucs and Cubs will once again take the field for the second game of this series on Wednesday.  With a difficult schedule this first month of the season, including a west coast trip this week and into next week, it makes it even more important for this team to perform well in these final two games of the series against the Cubs.