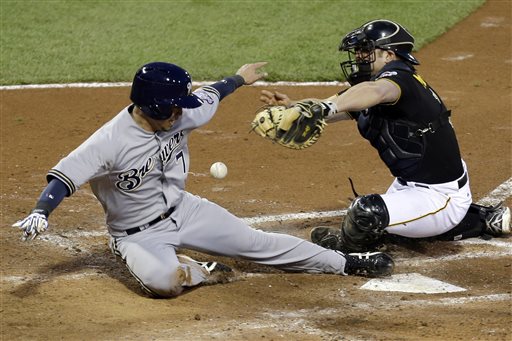 Two weeks ago the Pittsburgh Pirates and Milwaukee Brewers battled in a three game series that heavily featured the long ball.  The opener to this four game series featured small ball by the Brewers and little offense from the Pirates, which led to their 5-1 defeat.

A.J. Burnett took the mound tonight and was off his game from the beginning.  He would face six batters in the first, but allow only one run.  The telling stat that would continue throughout the night would be the Brew Crew stealing two bases in the first alone.  Milwaukee would steal two more bases in the fifth, the first resulting in the first of two runs to cross the plate that inning.

The seventh inning was the worst of the night for Burnett as he would collect two fielding errors on throws to first base, allow another runner to steal a base and give up his fourth run of the night.  He would leave after that with three of the four runs earned and striking out six.  A.J. was clearly not on top of his game tonight, as Milwaukee took advantage of his trouble with holding base runners and Michael McKenry continuing to struggle throwing them out.

Pittsburgh’s offense was held in check with Marco Estrada on the bump.  Through seven innings they only collected three hits and scored their lone run in the seventh on a ground out to third by Pedro Alvarez that scored Gaby Sanchez.  Estrada left after the inning while striking out five and walking one batter.

Milwaukee picked up the final run of the game in the ninth off of Tony Watson, while Pittsburgh would go 1-2-3 in the bottom part of the inning to win the game.

Overall I gotta say that the Pirates looked a bit jet lagged after returning from New York.  Milwaukee took advantage of all the Pittsburgh mistakes tonight and that led to the win.  Jeff Locke will look to pick up a win tomorrow night as he starts for the Buccos.  First pitch will be at 7:05pm.