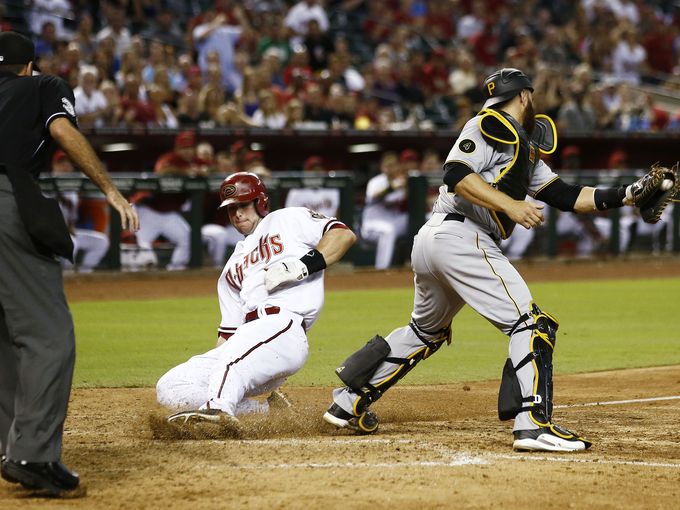 This was a bad day for any Pittsburgh Pirates fan. First off the front office failed to make any trades before the 4pm deadline and then the team turned in a less than stellar performance against the Arizona Diamondbacks. Errors in the field and poor starting pitching were the main factors in a 7-4 loss.

Jeff Locke took the ball to start the game and never looked all that comfortable over the course of his five and a third innings of work. He allowed four earned runs, with two more coming on errors. In total, Locke allowed nine hits, two home runs, two walks and five strikeouts.

Pittsburgh had the lead early on a Russell Martin two RBI double in the second inning. That lead was gone after a low throw to first by Pedro Alvarez was not handled by Ike Davis, who did not make a good attempt to stretch and pick it out of the dirt. Arizona would take the lead in the fifth on a base hit by Jordan Pacheco.

The sixth inning was dominated by long balls. Neil Walker tied the game with a solo shot that landed in the pool in deep right center field. In the bottom part of the inning the Diamondbacks connected on two homers that totaled three runs.

The only other offense that appeared for the Buccos was an Andrew McCutchen RBI single in the eighth. That run was quickly cancelled out in the bottom part of the inning when Nick Ahmed hit the third home run for the Diamondbacks on the night.

Well folks the battle lines have been drawn. Other teams in the divison made moves to improve, while the Buccos decided to stand pat. Personally I don’t like the move, since they clearly have holes in the lineup. Only time will tell if tonights performance is a trend for the remainder of the 2014 season.