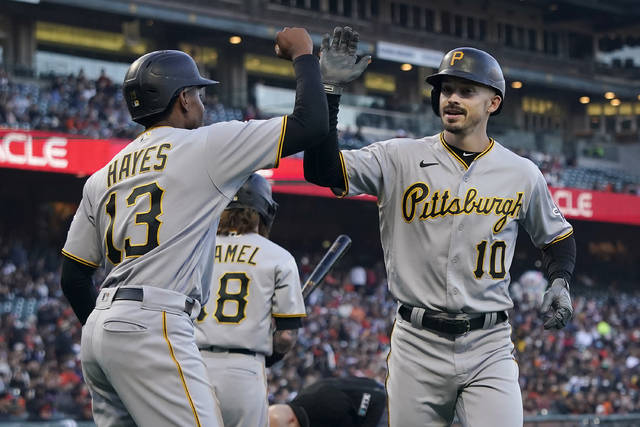 After being swept by the Arizona Diamondbacks in their previous series, the Pittsburgh Pirates headed further west to begin a three-game series with the NL West leading San Francisco Giants.  San Francisco is easily one of the biggest surprises in baseball this season, with much of the offseason hype in their division being placed upon the defending World Series Champion Los Angeles Dodgers and big money spending San Diego Padres.

The Pittsburgh offense got the scoring started in the second inning when Gregory Polanco drove in Ben Gamel on a triple to right.  They were able to add two more runs in the third when Bryan Reynolds hit a 407 ft. home run to right.  All of those runs came against San Francisco starter Johnny Cueto.  Cueto would pitch five innings, allow three hits, and strike out seven while allowing one walk.

The Giants got on the board in the third on a Steven Duggar solo homer to right.  They would come back to tie the game at three in the sixth with a two-run home run by Alex Dickerson to right.  Those runs were all charged to Chad Kuhl, who would work 5.1 innings allowing three runs on six hits with eight strikeouts and one walk.

Some shotty pitching and defense helped the Pirates plate three runs in the seventh inning.  Dominic Leone would walk Adam Frazier with the bases loaded to give Pittsburgh a one run lead.  Then with two outs and the bases loaded, Gamel looked to have grounded out to first for the final out, but LaMonte Wade Jr. could not handle the ball allowing two runs to score.

Wade would get one of those runs back when he hit a RBI triple in the ninth, but it would not be enough as the Pirates started off this three-game series with a 6-4 victory.  The win snapped a four-game losing streak.  Game two of this series will take place Saturday night at 9:05pm.  Wil Crowe will be the starter for Pittsburgh, while San Francisco will counter with Kevin Gausman.