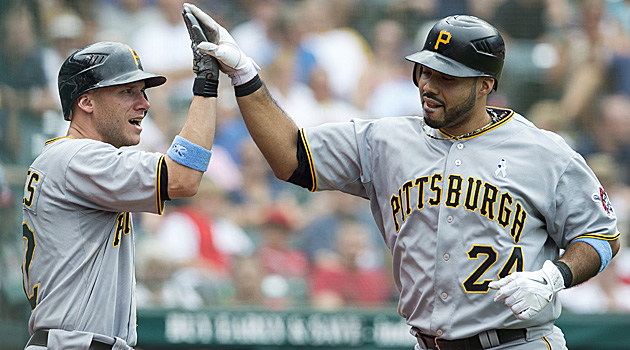 All season, all we’ve said is how much different this year’s team is from a year ago.  Today, during their marathon 19-inning game against the St. Louis Cardinals in the rubber-match of the series at Busch Stadium, we saw another example of that trend.  A year ago, the Pirates lost a heartbreaker in Atlanta to the Braves on a call by umpire Jerry Meals…yeah, we already know that story.  But today, the Pirates held one of the very best offenses in baseball to only three runs through 19 innings, and unlike a season ago, the Bucs earned a victory for their efforts…and it couldn’t have come at a better point in the season.

After over six hours of baseball, the Pirates took the lead for good in the top of the 19th.  Pedro Alvarez crushed his 23rd homerun of the season to give the Bucs the lead, and later in the inning, Andrew McCutchen delivered a two-run single for some much needed insurance.  Wandy Rodriguez shut things down in the bottom of the frame to seal the win, 6-3, winning his eighth win of the year.

The game almost ended in the 17th as the two teams traded runs.  With two outs and the bases loaded in the top of the 17th inning, Garrett Jones slapped an infield single, allowing James McDonald to score from third base. St. Louis responded in the bottom half on a sacrifice fly by Tony Cruz.

Jeff Karstens and Jaime Garcia pitched marvelous games tonight for their respective teams.  Garcia made his 12th start of the season and his first in nearly two months, and looked extremely impressive, striking out ten Pirates’ hitters through his eight innings work.  He gave up two runs on five hits, while Karstens gave up two runs on just two hits through his seven innings.

The Cardinals took the lead in the fourth inning on a two-run double by Carlos Beltran, scoring Allen Craig and Matt Holliday.  The Pirates responded a couple innings later by scoring two runs of their own in the sixth inning.  After Clint Barmes led off with an infield single, Karstens reached on a fielding error by Garcia on an attempted sacrifice bunt.  After back-to-back sacrifices by Jose Tabata and Josh Harrison, McCutchen beat out an infield single to score Karstens from third.  The game remained tied until Jones’ RBI single in the top of the 17th and the Cardinals’ response in the bottom half.

This was a huge victory for the Pirates, and this entire weekend, winning a series against a tough team in a tough environment.  A total of 16 pitchers were used between the two teams, and Pirates’ bullpen, in particular, was incredibly solid during the latter innings of the game.

This was a highly anticipated series by fans of both teams.  After all, the two N.L. Central foes are battling for the final Wild Card spot, and were separated by a single game in the standings prior to this weekend.  Each game played this weekend was a one-run contest, further proof of just how close this Wild Card race could be down the stretch.  The Pirates had an opportunity to win every game in this series, and it has been very uplifting to see the team battling back after a terrible start to the series against the Los Angeles Dodgers earlier this week.  They are playing much better baseball than they were at the beginning of the week, which is huge for their confidence going forward.

The Bucs will now look for some revenge against a San Diego Padres team who took two of three of them at PNC Park.