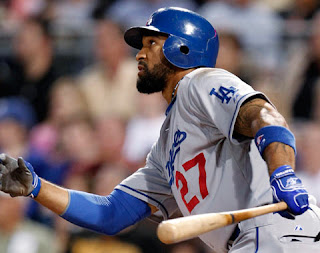 The Pirates’ pitching staff finally looked vulnerable on Tuesday night, and the Dodgers took advantage of it, as they forced starter Kevin Correia out of the game in the seventh inning hammered the Buccos’ bullpen on way to a 10-3 rout at .
Correia pitched well through five innings, but he ran into trouble in the sixth.  Andre Ethier gave the Dodgers a 1-0 lead on an RBI single to right center field.  The very next batter, Matt Kemp, blasted a three-run homerun to deep center, and all of a sudden, the Buccos were in a 4-0 hole.
Correia would pitch 6.1 innings, giving up five runs (four earned) on ten hits, raising his ERA to 3.25.  He took the loss tonight, falling to 5-3 for the season.
Andrew McCutchen crushed a solo homerun to deep left field to get the Pirates on the board in the bottom half of the inning.  Jose Tabata followed that up with a double, moved over to third on Matt Diaz’s ground out, and scored on Neil Walker’s sacrifice fly.  At this point, the Pirates were right back in the ballgame, trailing 4-2 heading for the final three innings of the game.
The eighth inning is where the game fell apart for the Pirates.  After the Dodgers scored a run in seventh to give them a 5-2 advantage, they destroyed the Buccos’ bullpen for five runs.  Most of the damage in the inning, and throughout the game, was done by the first four batters in the lineup for , who, as a collective unit, tallied ten hits on the night.
Mike Crotta took most of the beating, giving up four runs on three hits while walking one without recording a single out.  His ERA now sits at 9.28.  Chris Resop recorded the final six outs for , giving up one run on two hits, while walking two and striking out four batters.
McCutchen was the star of the day for the Buccos, going 3-4 with two homeruns, two RBI’s, and two runs scored, raising his batting average to .242.  As a team, though, the Pirates were only able to muster seven total hits, three less than the Dodgers had runs scored.
This is the type of game that the Pirates have to forget about and get back out on the field tomorrow with a clean slate.  Correia didn’t pitch a bad game…in fact, he was in control through the first five innings.  He made the mistake to Matt Kemp and paid for it, putting himself in a four-run hole.  Mike Crotta continues to struggle for the Buccos.  The bullpen has certainly been shaky as of late, which is definitely a cause for concern.  It is inspiring to see Cutch swinging a hot bat.  Ryan Doumit also continued his strong presence at the plate, tallying another hit, maintaining his batting average at .297.
The Pirates and Dodgers will take the field for the third of their four game set tomorrow evening at 7:05.  The Buccos will try to get back to their winning ways with Paul Maholm on the mound.
Record Vs. Dodgers: 1-1
Record Vs. N.L. West: 7-8
Record At Home: 7-10
Overall Record: 18-18
And…
As Always…
Let’s Go Bucs!