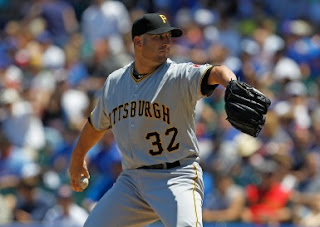 When a team has lost for nearly 2 straight decades, there is certainly plenty of blame to go around.  Above all else, though, which has been proven year after year, that pitching is by far the most critical aspect to a team’s success.  Obviously, it is no surprise to any avid baseball fan that the Pirates, who finished another dismal season in 2010, suffered from inconsistency and unreliability from their starting, relief, and closing pitching throughout the entire year.
The Battlin’ Buccos are preparing to enter camp with four starters, including Kevin Correia, Paul Maholm, James McDonald, and Ross Ohlendorf.  With these being the favorites to fill the top four spots, leaving one final available slate in the starting rotation.  As of right now, that vacancy will look to be filled by one of three early front-runners:  Brad Lincoln, Charlie Morton, and Scott Olsen.
will by far be the most headline-worthy candidate, one way or another, as his success could range from established 5th starter for the Pirates or he could find himself back in Triple-A Indianapolis’s rotation.  After all, Charlie Morton is out of options and about at the end of his rope in terms of chances that will continue to be given to him by Pirates’ management.  While the possibility for success still exists, his inconsistent pitching and inability to put together multiple strong performances at the major league level have all but diminished any confidence that he or the rest of the ballclub has in himself to be a successful pitcher for the Pittsburgh Pirates.  Scott Olsen, on the other hand, has had proven big league success in the past.  However, as we all know as Pirates’ fans, past success does NOT always lead to future success.
Brad Lincoln was called up to the majors, along with Jose Tabata and Pedro Alvarez, last June.  As a unit, the trio was expected to make an immediate impact and represent a key part of the organization’s young core.  While Tabata and Alvarez delivered (for the most part), struggled.  Overall, the right-hander finished his debut season with a 1-4 record and a 6.66 ERA, while walking 15 batters, striking out 25, in just over 52 innings of work.  He gave up nine homeruns, while opponents hit over .300 off of him.  While there’s something to say about major league experience, these aren’t exactly the most encouraging numbers as he heads into his second season as a potential Pirates’ starter.
Perhaps of greater importance of the team’s early success this season is the pitching situation.  Be sure to check back right here at FFTS throughout the rest of the winter and spring training for all the latest news and updates surrounding the pitching situation and everything else Pirates’ related leading up to the 2011 season.
And…
As Always…
Let’s Go Bucs!