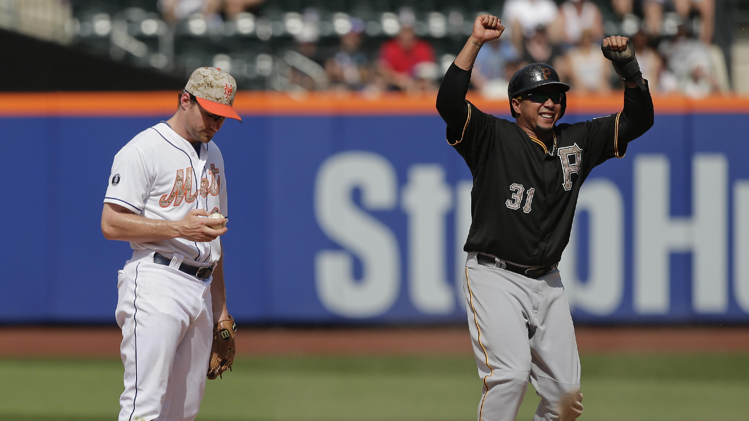 The Bucs had many early opportunities to score against Mets’ pitcher Jacob deGrom.  Despite loading the bases in the first inning and putting two runners on in the second, Pittsburgh was unable to push a single run across.  In fact, the Bucs had at least one runner on in each of the first five innings, but couldn’t find a way to score.

New York took the lead in the fifth inning off Pirates’ starter Brandon Cumpton, who has taken the spot in the pitching rotation for Wandy Rodriguez.  Daniel Murphy singled to shallow right center, scoring deGrom.  Juan Lagares advanced to third on the hit, and then scored on Josh Harrison’s throwing fielding/throwing error, giving the Mets a 2-0 advantage.

The Pirates tied things up in the eighth inning via two huge pinch hit at-bats.  Sanchez hit a solo homerun to left field to cut the lead in half.  After Starling Marte doubled down the third base line, Jose Tabata smacked a pinch hit single to right, scoring Marte and tying the game.

After Tony Watson pitched a scoreless bottom half of the eighth, Pittsburgh took the lead in the ninth.  Walker got things started with a one-out single, and McCutchen walked to put runners on first and second.  Sanchez singled to shallow left, scoring Walker, and Cutch scored on the error on the exchange from left field to home, giving the Bucs a 4-2 lead.  Russell Martin followed with an RBI double to deep center, scoring Sanchez.

Lucas Duda led off the bottom of the ninth with a solo homerun off Mark Melancon.  But the veteran responded by setting the next three Mets’ hitters down in order to record the save and clinch a huge come from behind victory for the Bucs.  Although he didn’t get the victory, Cumpton pitched well, giving up two runs (one earned) on seven hits through six innings.

This was a great way to start this road trip for the Pirates.  This will be another challenging stretch for the Bucs, and after a strong home stand, this was huge for the team to carry some of that momentum on the road with them, putting them in good position to win this series against the Mets.  The two teams will match back up tomorrow evening for the second game of the series.  Edinson Volquez will take the mound for the Bucs against the Mets’ Jonathon Niese.