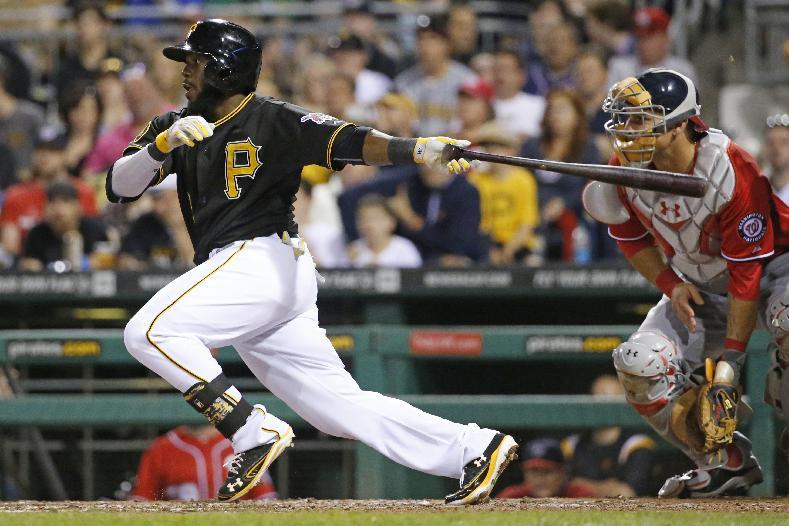 The game featured a pitching matchup between two of MLB’s top young stars – Stephen Strasburg and Gerrit Cole.  Both pitchers have shown brilliance in their young careers, and while neither was in “shutdown mode” tonight, each pitched well enough to win.  Strasburg gave up three runs on seven hits with two walks and seven strikeouts in seven innings, while Cole gave up two runs on five hits with three walks and seven strikeouts through six innings.

The Pirates’ bullpen, which has had moments of vulnerability this season, was solid tonight.  Jared Hughes and Jeanmar Gomez each pitched a scoreless inning of relief, setting the table for Mark Melancon, who recorded his ninth save of the season.  Hughes earned the victory, his third on the year (3-1).

The Nationals took the lead in the fourth inning on a solo homerun by Ian Desmond.  Neil Walker’s solo HR in the bottom of the inning tied things up, 1-1.  Washington answered back immediately, though, with a run in the fifth.  Wilson Ramos singled home Anthony Rendon, putting the Nats on top, 2-1.

This was another hard fought victory for the Pirates over the Nationals.  Each game of this series could have gone either way thus far, but the Bucs have repeatedly found ways to win these games.  Harrison continues to play himself into that starting spot in right field night after night with his clutch hitting.  It’s huge for the team to find ways to win a game in which Andrew McCutchen and Pedro Alvarez combined to hit 1-8.  Entering this series, many critics and fans were starting to question how this season would start to take shape.  But now, the Bucs are playing well and the optimism has returned to PNC Park.

The Pirates will look for their fifth victory in a row and a possible s***p tomorrow afternoon.  First pitch is scheduled for 1:35pm.