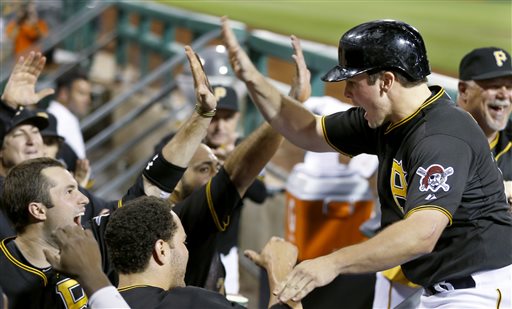 The Pittsburgh Pirates and Detroit Tigers headed to PNC Park to wrap up this home and home series.  With each team picking up a win in Detroit, both had the opportunity to win this series.  The Pirates had A.J. Burnett on the hill tonight and the offense was looking to give him some support, but faced a tough foe in Anibal Sanchez.

Neil Walker, the hero from last night, got the Buccos on the board first with a solo home run in the fourth inning.  That lead would not last long as the Tigers collected the tying run on an Andy Dirks double and then took the lead with a Miguel Cabrera two run dinger in the top of the fifth.

That would be all the earned runs Burnett would allow in his six innings of work.  He finished with four K’s and four walks.  I would not call this his best outing of the year, but he managed to keep his team in the game before handing the ball over to the bullpen.

The Pittsburgh offense brought the lumber in the seventh inning.  Pedro Alvarez hit a double into the north side notch that brought in two runs to tie the game at three.  Travis Snider then traded places with El Toro to put the Pirates ahead.  After Snider took third on a wild pitch, he scored on a bunt single by Jordy Mercer to add an insurance run.

After Bryan Morris pitched a shutout in the seventh, Tony Watson would pick up his ninth hold of the year with a scoreless eighth.  That led to Jason Grilli taking the hill and earning his 22nd save of the year and the Pirates winning 5-3.

Another good win tonight as the Pirates were able to come back on the Tigers.  This interleague series will wrap up tomorrow night with Jeff Locke taking on Doug Fister, first pitch is at 7:05pm.