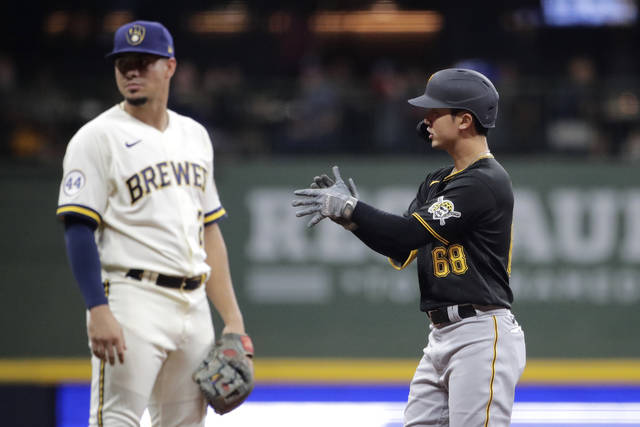 Miller Park, or as it is called now American Family Field, the Milwaukee Brewers current address has been a tough place for the Pittsburgh Pirates to play since it opened in 2001.  Through six innings on Tuesday night, it looked like Pittsburgh was going to gain another L at the ballpark.  They had yet to record a hit and were down four runs.  That all changed with a five run seventh and three run tenth, to lift the Pirates to an 8-5 victory over Milwaukee.

Max Kranick started for Pittsburgh and again looked like a player that needs a little more seasoning in the minors.  He would allow three runs on five hits with three walks and four strikeouts.  The Brewers got their first run in the first on a Avisail Garcia single to left center.  Willy Adames would hit a solo home run, followed by another Garcia RBI single to put the home team up by three.  Their fourth run came in the fifth when Rowdy Tellez singled to center to drive home Omar Narvaez.

Brewers starter Adrian Houser had a no hitter going through 6.1 innings before being lifted for a high pitch count.  He would allow one run with five walks and four strikeouts.  That lone run would occur in the seventh inning with Kevin Newman hit a double to left to bring around Ben Gamel.  A fielding error by Adames would lead to Pittsburgh scoring their second run on a ball put in play by Bryan Reynolds.  Recently acquired Hoy Park made his presence felt when he cleared the bases with a double to right to give his new team a 5-4 lead.

Milwaukee would battle back in their half of the seventh inning to tie the game at five.  Garcia came through again for his team when he doubled home Adames.  This would come off of Pirates relief pitcher Chris Stratton, who was tagged with his second blown save of the season.  After neither team was able to score over the next two innings, this game was headed to extras.

Only one extra inning was needed tonight as Pittsburgh would come through with three runs in the tenth.  An infield single against the shift by Gregory Polanco brought in Ke’Bryan Hayes for what turned out to be the game winning run.  They would then add two insurance runs with a Reynolds single to center.  David Bednar, who pitched the ninth inning, would come back out in the tenth to earn his third win of the season.

For a game that looked to be another road loss against the Brewers, this one had a very exciting finish.  With not much to play for, these Pirates battled back late, and got help from a mixture of veterans and young players.  These two teams will battle it out one more time in this three-game series, with Steven Brault making his season debut today against Freddy Peralta.  First pitch is set for 2:10pm.