Pirates Roughed Up In Opener vs. Mets 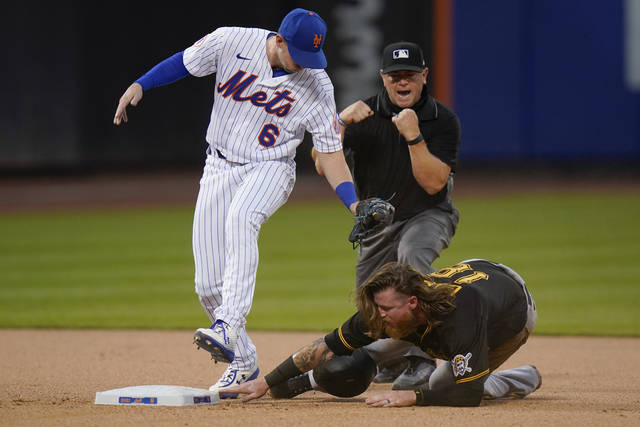 After being rained out in their opener on Thursday, the Pittsburgh Pirates and New York Mets began their four-game series on Friday from Citi Field.  It was a rough night for Pittsburgh.  Even though they kept pace with New York in the hit column, the Mets would use a ten run sixth inning to put a cap on a 13-4 victory.

The Pirates collected their first run of the night when Michael Perez was hit by a pitch with the bases loaded in the second inning.  New York quickly capitalized in the third with a pair of runs.  Jonathan Vilmar hit a solo homer and Brandon Nimmo hit an RBI double to right center.  Pittsburgh then tied the game in the fifth when Adam Frazier singled to right to bring in Jared Oliva.

That was as close at the Pirates got, as the Mets bats came to life an inning later.  It would start with a Dominic Smith RBI single to right.  With two runners on Pete Alonso smacked a home run to right center.  The seventh run of the night came home when Joe Peraza was hit by a pitch with the bases loaded.  After a bases loaded walk to Nimmo, Francisco Lindor hit a grand slam to left center.

The Pirates would manage another run in the seventh when Rodolfo Castro hit his first ever MLB home run.  New York would answer with a solo homer in their half of the seventh by Jonathan Villar.  Pittsburgh would grab the final run of the night in the ninth when John Nogowski hit an RBI single to left center that brought around Wilmer Difo.

As you can tell, the pitching from the Pirates was not very good.  All four pitchers gave up runs with starter JT Brubaker allowing six runs on six hits with seven strikeouts and one walk over five innings.  Sam Howard was tagged for five runs on one hit with three walks and one strikeout.  That strikeout would be the only out he would record as Kyler Keller got the final two in the sixth inning.  Austin Davis pitched the seventh and eighth allowing one run on two hits with four strikeouts.

Hopefully this ballgame was a one off and not an indication of how the rest of this series will go.  Saturday will bring about a seven-inning doubleheader beginning at 4:10pm.  Tyler Anderson will take the ball in game one, while Max Kranick is slated to pitch game two after pitching five perfect innings against the St. Louis Cardinals in his debut.