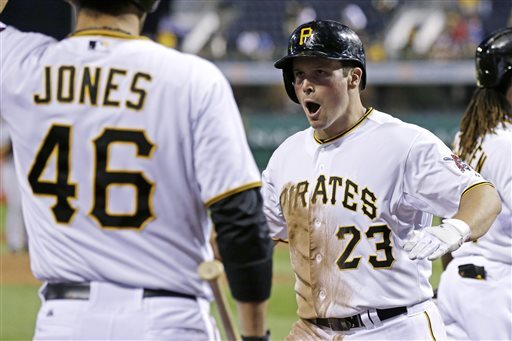 For third consecutive night, the Pittsburgh Pirates got the best of the Milwaukee Brewers at PNC Park.  While the previous two games were tight throughout, tonight’s matchup was anything but close.  The Bucs used a four-run sixth inning to break their series finale wide open in a 7-1 rout of the Brewers.

The Brewers took the lead in the first inning on an RBI single by Jonathan Lucroy, which scored Jean Segura.  In just his second start of the season thus far, Francisco Liriano certainly would’ve wished for a better opening frame.  But he settled down after the first inning, and kept the Brew Crew in check.

Pittsburgh tied the game in the bottom of the fourth on an RBI double by Clint Barmes, scoring Pedro Alvarez.  Barmes has been hitting the ball very well as of late, actually adding an offensive presence to the bottom of this Bucco batting order.

After Liriano got himself out of a tough jam in the top of the fifth inning, the Pirates’ offense came up big in the bottom half of the frame.  Starling Marte led off the inning with a bunt single, and scored on Travis Snider’s two run homerun to deep center field, pushing the Pirates in front, 3-1.  They seemed poised to add more runs in the inning, but after Garrett Jones and Russell Martin singled to put runners at the corners, Pedro Alvarez’s ground out to first ended the threat.

In a seemingly carbon copy of the fifth inning, the Brewers squandered an opportunity to score in the top of the sixth inning.  The Bucs, on the other hand, stretched the lead further in their half.  After Barmes reached on Segura’s throwing error, Marte doubled off the right hand wall.  Snider’s bloop single scored Barmes, and Andrew McCutchen’s single scored Marte.  Jones and Neil Walker added singles as well, extending the lead to 7-1.

The pitching staff for the Bucs held Milwaukee in check for the third straight game.  Liriano gave up just one run on six hits through 5.2 innings of work, while Justin Wilson, Bryan Morris, and Jose Contreras combined to pitch scoreless, hitless baseball.

This was a huge game and series for the Pirates, who took three of four from a divisional foe.  With their home stand off to a great start, the Bucs will welcome two struggling teams, the Houston Astros and Chicago Cubs, to PNC Park over the next few days.