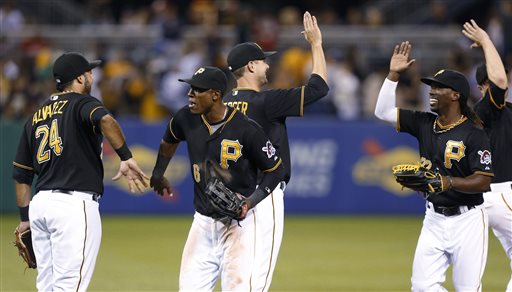 There is suddenly a lot of buzz surrounding the Pittsburgh Pirates here in the Steel City as well as across the rest of Major League Baseball.  And no wonder.  Remember, this was a team that most saw as a fraudulent team that plays well in the first half of the season before plummeting back to earth down the stretch.  That’s what has happened the previous two seasons, so why should 2013 be any different?

Well, even though it’s still in the first half of the year, things seem to be a little different at this point in the season.  With their 10-3 beatdown of the Milwaukee Brewers in the first of a three game series between the two N.L. Central teams at PNC Park on Friday night, the Pirates are now have a Major-League leading 49-30 record.

Gerrit Cole won his fourth straight win to begin his big-league career, going six innings, giving up three runs on eight hits.  After a very shaky first inning where he gave up three runs, he settled in, baffling the Brewers in his final few frames on the mound.  Ryan Reid pitched three innings of two-hit baseball to hold Milwaukee in check.

But even though Cole won his fourth straight decision, this night’s headlines belonged to the Bucs’ offense, who tallied ten runs on twelve hits in front of a packed PNC Park crowd.  Andrew McCutchen went 3-5 with a homerun and three RBIs, while Starling Marte also had three hits, including a triple and two RBI’s.  Pedro Alvarez added a pair of hits and an RBI, bumping his batting average up to .246 for the season.  Neil Walker got the scoring started with a two-run double in the second inning.

Friday night’s game was yet another encouraging sign for Pirates fans hoping that this year will be different from the previous two seasons.  The Bucs will go for the series victory tonight in the second game of the weekend set.  First pitch is scheduled for 7:05pm.