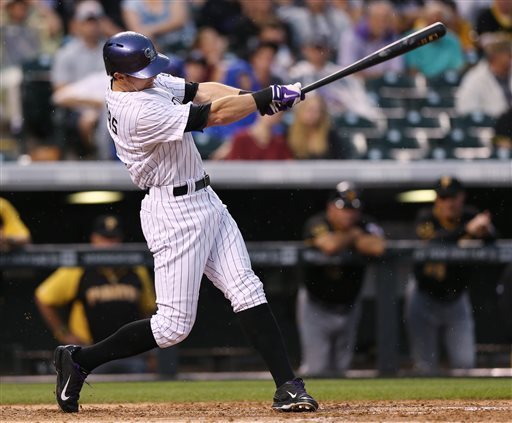 As frustrating as last night’s game was between the Pittsburgh Pirates and Colorado Rockies, tonight’s game may have been even worse. Once again, the Bucs were outplayed in every facet of the game, losing 8-1 to the Rockies.

Colorado rattled Jeff Locke for six runs on ten hits through 6.2 innings, slowly putting the Pirates away, inning by inning. Meanwhile, the Bucs’ offense couldn’t muster any type of rally against Rockies’ starter Tyler Matzek, who gave up just three hits and two walks through his seven innings of work. Yes, for the second straight night, a Rockies’ left handed pitcher was dominant.

The Rockies scored the game’s first run on an RBI single by Josh Rutledge in the third inning. Drew Stubbs homered in the fourth to push the lead to 2-0, and a single by Nolan Arenado and a ground out by Corey Dickerson each scored another run in the fifth, giving the Rockies a comfortable 4-0 lead.

Arenado and Dickerson each homered in the seventh inning to push the lead to 6-0. Rutledge’s two-run single moved the Rockies’ total to eight runs for the second game in a row.

Ike Davis hit a solo homerun to break up the shutout bid in the ninth inning.

This was just a horrible game to watch for us Pirates fans. For the second consecutive game, Pittsburgh simply didn’t come to play. The starting pitching has struggled, as has the bullpen, and the offense can’t put anything together. All around, this has been a terrible series for the Bucs in Denver.

They will try to salvage a game in the series tomorrow against Colorado. Edinson Volquez is scheduled to start for the Bucs against another left hander for the Rockies, Franklin Morales. First pitch is at 4:10pm.