Pirates Score Four In The First, Hang On To Beat Cubs 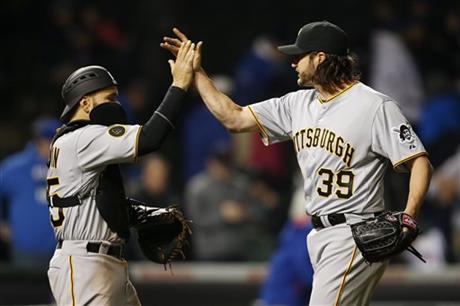 Early on, it looked like tonight would be an easy victory for the Pittsburgh Pirates.  The bats were on fire in the first inning, but after cooling off a bit throughout the night, paired with a less-than-stellar performance from their starter, the Bucs held on to beat the Chicago Cubs, 7-6, at Wrigley Field.

The Pirates scored four runs in the first inning off Cubs’ starter Edwin Jackson.  Starling Marte hit the first pitch of the game for a double, and, after a walk to Andrew McCutchen, Pedro Alvarez hammered a two-run double into the gap.  After Russell Martin was hit by a pitch, Neil Walker smacked an RBI single and Travis Ishikawa’s sacrifice fly scored Martin.

As it turns out, the Bucs needed every bit of their offense tonight against the Cubs.  Charlie Morton struggled tonight, taking a step backwards from his first start of the season, where he tossed six scoreless innings.  Tonight, he gave up five runs on eight hits through six frames.

After the Cubs tied the game at 4 in the third inning, the Pirates responded immediately the first next frame on an RBI single by McCutchen.  Ishikawa’s RBI triple in the fifth stretched the Bucs’ lead to two runs.  Castro’s homerun in the sixth, his second of the game, cut the lead in half, and Anthony Rizzo’s run scoring single once again made things even.  But Martin’s sacrifice fly with the bases loaded in the eighth inning scored Marte from third, proving to be the difference.

The Pirates got multi-hit games from Cutch, Alvarez, Martin, and Walker.  Marte scored three times, walked twice, and stole two bases.  And even though Ground Chuck struggled tonight, the bullpen came in and did a nice job per usual.  Tony Watson, giving up a run in the seventh inning, earned his second victory of the season.  After Mark Melancon pitched a perfect eighth, Jason Grilli earned his second save of the season with a 1-2-3 ninth inning.

This was a nice way for the Pirates to kick off a long nine-game road trip.  The offense looked solid, which is something they are going to need to make this trip a successful one.

The Bucs and Cubbies will hit the field for the second game of the three game series at Wrigley Field tomorrow.  First pitch is scheduled for 8:05pm.