Pirates Score Twice In The Ninth To Beat Astros 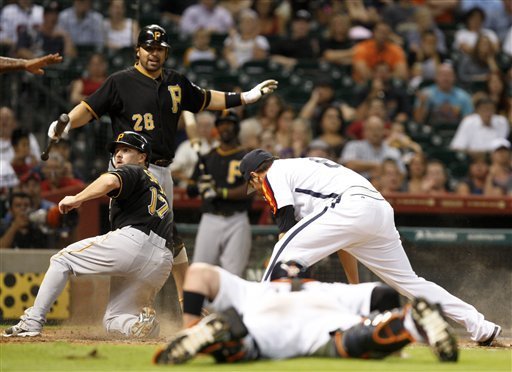 In previous seasons, it has seemed as though the Pirates looked for ways to lose games.  While the Bucs are finding ways to win games THIS year, the Houston Astros have been enduring a horrendous final season in the National League so far.  Those trends continued for both teams tonight at Minute Maid Park, as the Pirates scored two runs in the ninth to beat the Astros for the second consecutive night.

After falling behind by three runs after three innings, the Pirates began to chip away, bit by bit, starting with a solo homerun by Alex Presley in the fourth inning.  The Astros countered with a run of their own to make it 4-1, but Michael McKenry’s two-run homerun in the fifth cut the lead to one run.  McKenry was 3-4 on the night, including the homerun, as well as a double and a single.

McKenry’s leadoff double in the seventh inning got yet another Pirates rally started, and after a Clint Barmes sacrifice bunt to advance the runner over to third, Josh Harrison hit a crucial sacrifice fly to center field, scoring McKenry and tying the game, 4-4.

Entering the ninth inning trailing 5-4, the Pirates once again overcame a deficit and came away with a late-game victory.  Starling Marte’s sacrifice fly scored Jordy Mercer to tie the game, and Drew Sutton scored the game-winning run on a wild pitch which skipped out of the grasp of Astros’ catcher Chris Snyder.

While McKenry lead the offensive attack with three hits, Andrew McCutchen and Alex Presley added two hits each.  For Cutch, his two doubles have his average sitting at a Major League leading .369 for the season.  Garrett Jones and Pedro Alvarez each added a single to round out the hit total for the Pirates.

Despite the victory tonight, the Pirates didn’t get a great start from Jeff Karstens.  He gave up four runs on six hits through five innings, and he never really seemed to be in control of his pitches as he is so often is on most nights.  The bullpen held their own for the most part, although they weren’t as solid as usual.  Chris Resop pitched a scoreless sixth inning, and after Jared Hughes gave up a run in the seventh, Tony Watson and Joel Hanrahan tossed scoreless innings in the eighth and ninth.  Watson earned his fifth win of the year while Hanrahan notched his 31st save.

This is the type of game that is won by a team like the Pirates because they’re having that type of season where things go right.  Unfortunately for Astros’ fans, this was also the type of game that their team loses.  The Pirates are just finding ways to win games, and the Astros are finding ways to lose them.  Two games in, the Pirates have a great chance to win this four game series, or even earn a sweep this weekend.

Wandy Rodriguez will make his first as a Pittsburgh Pirate tomorrow night against his former team.  First pitch is scheduled for 7:05pm.