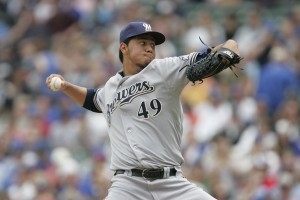 The Pittsburgh Pirates have struggled with the Milwaukee Brewers for years, but this year it looked like the roles had been reveresed with the Brew Crew looking up at the Buccos in the standings.  This series proved that Milwaukee can still get the best of Pittsburgh as the Pirates lost to the Brewers 4-0 tonight and dropped two out of three in this series.

Yovani Gallardo got the best of the Buccos offense tonight, which seems to be the case everytime he takes the mound.  He would allow six hits, strike out five and walk one over seven innings of work.  Along with Brandon Kintzler, they were able to hold Jose Tabata, Pedro Alvarez, Gaby Sanchez, and Jordy Mercer hitless.  Neil Walker, Andrew McCutchen, and Marlon Byrd each had one hit, while John Buck went 3-3 in his Pittsburgh debut.

Gerritt Cole started for the Pirates tonight and while he allowed ten hits over 7.1 innings, the lack of offense made the four runs, three earned, hurt that much more.  He was able to strike out four while walking one.  The unearned run came in the first when Cole made a poor pick off throw to first.  That allowed the runner to move to third and then score on a shallow single to right. Bryan Morris and Justin Wilson cleaned up the 1.2 innings of work that were left on the mound.

With the Buccos in the playoff race, it is imperative that they win series, especially against teams that are in the bottom of the division.  They are now one game behind the St.Louis Cardinals and 2.5 games ahead of the Cincinnati Reds in the Central Division.  Tomorrow night begins another “Biggest Series of the Year” with the Cardinals coming to town for three games.  Pittsburgh will need to play their best, as this series could be the diifference between being a division champion or playing for a wild card spot.