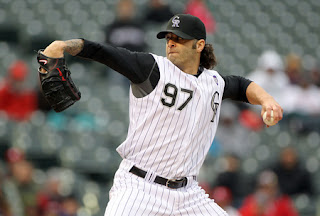 Only hours from the kickoff of the 2011 PirateFest celebration, the Buccos’ signed veteran left-hander Joe Beimel to a Minor League deal on Friday.
While the deal doesn’t guarantee Beimel a spot on the Major League roster, all expectations speak to the likelihood that Joe will be in a Pirates’ uniform to open the 2011 campaign.
While some skeptical Pirates’ fans and critics may not like the familiarity of this type of a signing (the acquisition of an older veteran rather than finding a young up-and-coming talent), this move may actually make a lot of sense from a baseball standpoint.
Without a doubt, the Pirates’ bullpen still has some holes, but one of the most glaring and worrisome has been the absence of an experienced left-handed reliever…until now.  The 33-year old brings an impressive amount of Major League experience across his 10-year career, something that the Pirates’ previous bullpen additions couldn’t offer the club.  Daniel Moskos and Tony Watson, while both offer tremendous upside, don’t have a minute of top level experience between them.
While Beimel may be slightly past his prime, he still brings experience, both on and off the field, which, if nothing else, can help aid Moskos and Watson, along with non-roster invitee Justin Thomas, in their development.  Still, by this signing, the Pirates are saying that they are more than confident in Beimel’s ability to step into critical relief roles immediately.
For those who may not know, Joe Beimel is utterly familiar with and surrounding areas.  After growing up in St. Mary’s, PA, he pitched for right here in .  The Pirates drafted him in the 18th round of the 1998 First-Year Player Draft, and Beimel made his MLB debut with the club in 2001.
For information on the signing of Joe Beimel, be sure to log on to the Pirates’ official website.
And…
As Always…
Let’s Go Bucs!