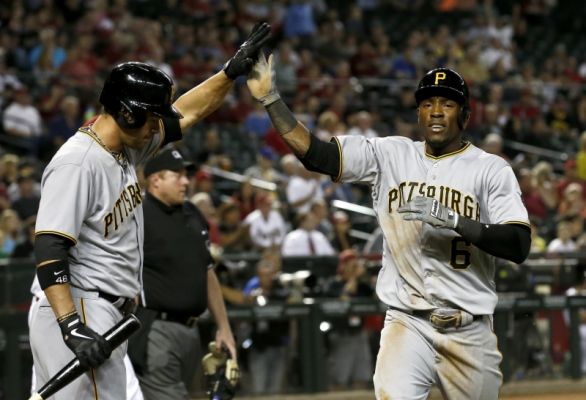 Entering tonight’s game against the Arizona Diamondbacks, the Pittsburgh Pirates had only managed a total of eight runs in six games, which had effectively led to a 1-5 record.  Tonight, the offense “exploded” and the bullpen kept the D-Backs in check as the Pirates took the first game of the series, 5-3, at Chase Field.

The Pirates scored three runs in the first inning on an RBI single by Andrew McCutchen and a two-run single by Travis Snider.  After the Diamondbacks scored a run in the second and two runs in the third to tie the game, Pittsburgh responded in the fifth inning on McCutchen’s sacrifice fly, scoring Starling Marte.  Garrett Jones added some much needed insurance with a solo homerun in the eighth inning.

Wandy Rodriguez made the start for Pittsburgh tonight, but he only lasted 2.1 innings before being removed from the game for tightness in his left hamstring.  The Bucs’ bullpen did a solid job for the remainder of the game.  Jeanmar Gomez did give up a pair of runs in the third inning, but actually earned the victory, thanks, in part, to the strong pitching from his bullpen counterparts – Justin Wilson, Mark Melancon, and Jason Grilli.

Once again, Marte and McCutched led the offensive charge for Pittsburgh, along with some big hits from Snider and Jones.  Cutch was 1-2 with a double, a walk, and two RBI’s, while Marte went 2-4 with a triple, a single, and a walk.

Unfortunately, a few of the Bucs who have been struggling in the early part of the season continued their trouble tonight.  Russell Martin was 0-3 with a walk, stretching his hitless streak to 17 at-bats this season.  Pedro Alvarez was also 0-3 with a walk and two strikeouts, while Neil Walker went 0-4.

With the win tonight, the Bucs snapped a four game losing streak.  While there are many things to be concerned about in regards to this team right now, it was a huge feat to get back on the winning side of things.  They have now put themselves in a strong position to take this series and get back to Pittsburgh on a winning note.  James McDonald will take the mound tomorrow evening for the Bus in the second game of the series.