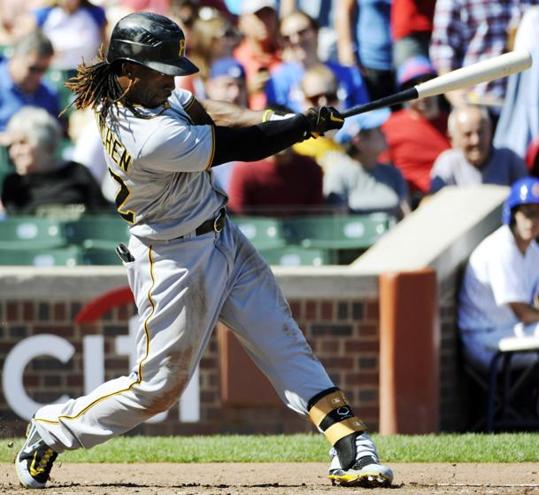 FINALLY!  After what has been a horrendous week of baseball, the Pirates ended their season-long seven game losing streak with a 7-6 victory over the Cubs this afternoon at Wrigley Field.

The Bucs scored early and often to build a large lead over the Cubbies, and held on late to tally their first win in over a week.  After building a 6-1 lead through four innings, the Pirates scuffled a big defensively down the stretch, and bullpen coughed up a number of runs in the latter innings, but did just enough to hold off the Cubs in the ninth inning.  Joel Hanrahan entered the ninth inning with a three-run lead, but after walking three and giving up two hits, “The Hammer” struck out Luis Valbuena with the bases loaded to end the threat and the game.

The Pirates’ offense came alive today, scoring seven runs on ten hits, including six through the first four innings.  Andrew McCutchen went 2-3 with a homerun, single, two walks, and an RBI, while Starling Marte and Clint Barmes also added two hits a piece.  The second hit for Barmes was a solo homerun in the seventh inning, which turned out to be the difference-maker in the game.

Wandy Rodriguez earned his 11th victory of the season today, giving up three runs (only one earned) on nine hits through six innings.  Tony Watson and Jared Hughes combined to toss a scoreless seventh inning, keeping the Cubs at a distance heading into the game’s final two innings.

Unfortunately, though, it wasn’t all positive for the Bucs this afternoon.  Jason Grilli and Joel Hanrahan, who have been the most impressive out of the bullpen this season, struggled mightily today.  Grilli was tagged for one a run on two hits, while Hanrahan gave up two runs on two hits with three walks before getting the final out today.  Clearly, both Grilli and Hanrahan have to be better the rest of the season than they were today, but it was all about simply getting a win this afternoon…and that’s exactly what they were able to do.

The Pirates haven’t been playing good baseball recently, and today’s victory certainly doesn’t change that.  But it does snap a losing streak, enables them to feel good about themselves for a couple hours before preparing for tomorrow’s game.  Baseball is a very mental game, and sometimes a day like this can kick things into a different gear.  The Bucs will need to put a string of wins together to keep pace and gain ground with the likes of the St. Louis Cardinals, Los Angeles Dodgers, Milwaukee Brewers, and Philadelphia Phillies for the National League’s final Wild Card spot.  They’ll match up against the cubs tomorrow afternoon for game three of the teams’ four game series.