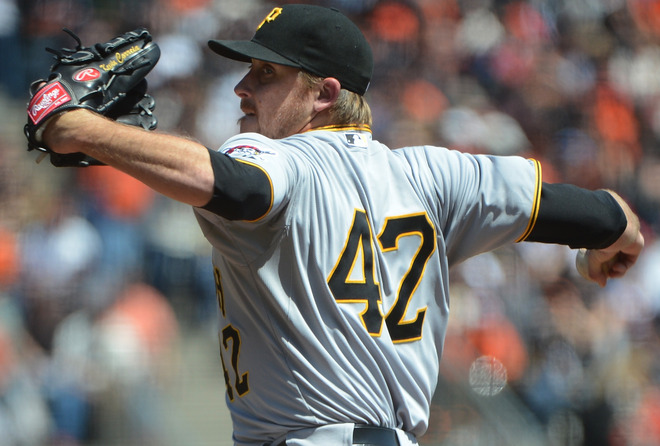 Well it took a week, but the Pittsburgh Pirates have finally put another notch in the win column with a 4-1 win over the San Francisco Giants.  With the win, the Buccos avoided being swept in the state of California after being losing three in Los Angeles and losing the first two games in San Francisco.

Kevin Correia pitched another great game today.  He would allow one run on three hits through six innings of work, while walking one and striking out three. The lone run Correia gave up came in the fifth inning on a sacrifice ground out to shortstop by Emmanuel Burriss that scored Brandon Belt.

The bullpen also stepped up again today.  Jared Hughes worked smoothly thru an inning of work giving up only one hit.  Jason Grilli’s inning of work had some drama as he would give up a lead off triple to Angel Pagan.  After a ground out, he would walk Pablo Sandoval, but then get the next two batters out to avoid any damage.  This would set up Joel Hanrahan for his first save of the year.  The Hammer has been shakey out of the pen this year and today would not be any different.  He would walk two batters, to give the Giants two chances to tie the game with a long ball, but fortunately that did not happen.

The Pirates offense was better today.  The caught some breaks by the Giants and capitalized on a few plays that pushed them in front.  In the second inning, Garrett Jones hit a solo home run off of San Francisco starter Ryan Voglesong.  Later in the inning Alex Presley would have an infield hit with the bases loaded that scored Neil Walker.  In the eighth a Sandoval throwing error would allow Andrew McCutchen to score.  This would be followed up by Josh Harrison sacrificing to the pitcher, which would score Casey McGehee.

Presley and Walker led the offense as each would go 2-4, with Presley having an RBI and Walker scoring a run.  Michael McKenry would walk three times, so it’s nice to see at least one Bucco have some plate discipline.  Down falls were the continued struggles of Jose Tabata and Pedro Alvarez as they would go a combined 0-8 with three strikeouts between them.

Thank God the Pirates won today.  This team needed a win in the worst way.  As a fan we can only hope that the offense continues to show signs of life and gives the pitching staff some breathing room.  The Buccos will still be on the road and it does not get any easier, as they will take on the defending N.L. West Champion Arizona Diamondbacks.  Which team shows up to take on the D-Backs is anyone’s guess, but that’s the fun part of being a Pirates fan, no one really knows whats going to happen.  First pitch on Monday is scheduled for 9:40.