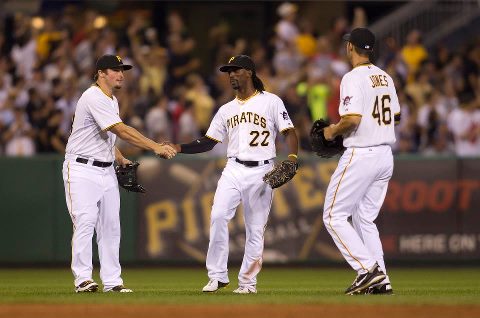 The Pittsburgh Pirates were in need of a win after losing four straight games.  In order for that to happen tonight against the Milwaukee Brewers, they needed solid pitching and timely hitting.  Jeff Karstens provided the pitching, while a four run fifth inning gave the Buccos enough for a 4-0 victory.

Karstens was solid throughout the night throwing seven shutout innings, allowing seven hits and striking out four batters.  The only tight spots for him were in the fifth and sixth innings when Brew Crew runners reached second base.  He was lifted from the game after facing one batter in the eighth with what appeared to be pain in his low back.

The bullpen closed off the game with Tony Watson and Jason Grilli finishing off the eighth while Joel Hanrahan put the hammer down on Milwaukee in the ninth.

The offense was shut down through the first four innings of the game.  When Pedro Alvarez was picked off second by Brewers catcher Martin Maldonado in the second, it looked like it may be another one of those nights.

The fifth inning is when the Bucco bats came to life. Michael McKenry would double home Neil Walker with one out to open the scoring.  Two batters later Karstens helped his own cause with an RBI single.  That was followed by a Jose Tabata double that scored Karstens.  Tabata was not on the basepaths for long as Travis Snider brought him home with a single to center.

This was just the kind of victory Pittsburgh needed tonight as they look to get back on track and pick up another series win.  Another injury did occur when Tabata came out of the game in the sixth with a groin injury.  Depending on the extent of the injury their may be some roster moves with Triple-A Indianapolis tomorrow.  These two teams will wrap up this series tomorrow afternoon at 1:35.