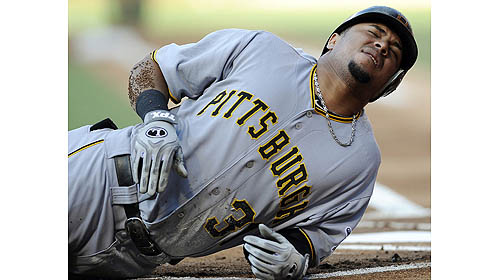 Citizens Bank Park has been a tough place to win baseball games for the Pittsburgh Pirates. It seems that regardless of how the Phillies and Bucs are playing, when the two clubs meet inPhiladelphia, the home team shines while the road team founders.  So far in this week’s series, through the first two games, that has been the case.  The Phillies came into yesterday’s game a season high six games under .500, while the Bucs were five games over .500 and only a game back of first place in their division.  And yet, after two games in this series, here the Pirates sit, two games down, after a 5-4 loss tonight.

This was one of the more frustrating losses in recent memory for Pittsburgh.  For the second straight game, the Pirates beat themselves in many respects.  While last night defensive inadequacies were mainly to blame, tonight it was all about the wasted opportunities on offense.  The Pirates left a total of six men on base, but none more devastating than those squandered in the seventh and eighth innings.

As was the case in the first game of the series, the Phillies took the early lead, scoring four runs in the first three innings to take a commanding 4-1 lead over Erik Bedard and the Bucs.  The Pirates’ left handed starter lasted six innings, giving up four runs on eight hits while walking two, but after a very shaky start, he was able to keep his team within shouting distance of getting back into the game…which is exactly what they did.

Pittsburgh scored their first run in the second inning on a sacrifice fly by Michael McKenry, scoring Pedro Alvarez.  McKenry, starting for Rod Barajas who sustained an injury to his knee last night, also had a double and a single on the night.  The Bucs added another run in the sixth inning on an RBI single by Casey McGehee which scored Andrew McCutchen, cutting the lead to 4-2.

As aforementioned, the Pirates had opportunities to tie (and/or take the lead) in the seventh and eighth innings, but couldn’t cash in.  After Clint Barmes forced a leadoff walk in the seventh and McKenry followed with a single, Drew Sutton, in his first at-bat as a Pirate, delivered an RBI double to cut the lead to just 4-3.  But with runners on 2nd and 3rd and no outs, Jose Tabata grounded out, and after Neil Walker’s fly out, McKenry was thrown out at home.

The eighth inning was just as hair-pulling for Bucs’ fans.  McCutchen led off with a double, but after three consecutive ineffective at-bats by Josh Harrison, Walker, and Alvarez, the Pirates were still down by a run.

Carlos Ruiz was the hitting star of the day for the Phillies, going 3-4, including a homerun in the bottom of the eighth inning, which gave closer Jonathan Papelbon another run of support, as he ended up needing, as he picked up his 20th save of the season.  Vance Worley earned his fourth win of the season, tossing six innings while giving up three runs on six hits.

McKenry had three hits on the night and Cutch had a pair, while McGehee and Alvarez added a hit a piece.  Tabata, Walker, and Garrett Jones, however, went a combined 0-9.

This has been a very difficult road trip thus far for the Pirates, but the most frustrating part is that a lot of the damage done has been self-inflicted.  After a four-error performance defensively last night, the Bucs left too many runners on base in situations that could put them in position to tie or even win the game.  Now, given wins this week by the St. Louis Cardinals and Cincinnati Reds, the Pirates find themselves in third place, three games out of first.  While it is still awfully early to be scoreboard watching, the Bucs need to stay within shouting distance of the teams in front of them in they’re serious about contending in the division at the end of the year.  Having dropped the first two games of this series, games three and four are that much more important.

James McDonald will take the hill for the Pirates when the two teams match up for the third game of the series.  The Phillies have yet to announce their starter for the 7:05pm first pitch.