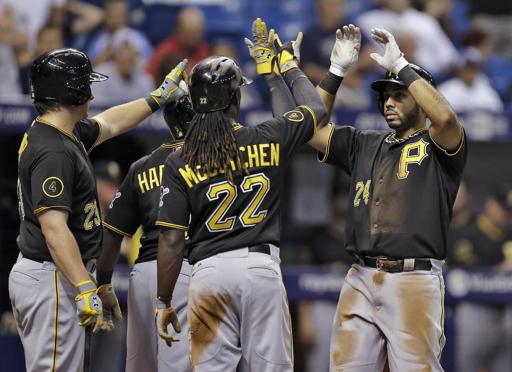 The Pittsburgh Pirates were given an opportunity to gain some momentum on this six game road trip.  They would face off against two last place teams and needed to start playing winning baseball, since the midway part of the season is right around the corner.

Tonight they began the first of three against the Tampa Bay Rays and it was an all-around great performance by Pittsbugh.  They had timely hits, slick fielding gloves, and a starter who went deep into the game.

The offense struck early with two runs in the top of the first.  Ike Davis would ground out with a runner on third to start the scoring.  That was followed up by a Russell Martin single off of Tampa Bay starter Alex Cobb.  Cobb would then make a throwing error to allow Martin to advance to second.

After the Rays scored their only run in the bottom of the first, the Pirates struck for a four spot in the third inning.  Andrew McCutchen brought in his first of two RBI on the night, with a single to center.  After Josh Harrison was intentionally walked, Pedro Alvarez would blast a three run homer to center field, his first home run since June 3rd, to give the Buccos a 6-1 lead.

Pittsburgh added on in the eighth with a Travis Snider single to center and then one more in the ninth when McCutchen singled to shallow center.  Great to see this offense have success tonight, this is something we hope to see for a long stretch heading into the All-Star break.

Edinson Volquez was on fire tonight going eight innings.  The lone run he gave up was a RBI single that he gave up to James Loney in the first inning.  After that he settled in allowing five hits, with one strikeout and two walks.  Jeanmar Gomez worked a scoreless ninth allowing one hit and striking out one batter.

Tomorrow’s game will feature Jeff Locke vs. Chris Archer and game time will be at 7:10pm.