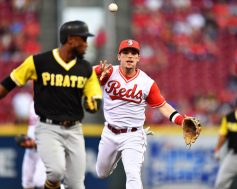 The Cincinnati Reds have been at the bottom of the N.L. Central division for almost the entire season…and yet, they continue to beat the Pittsburgh Pirates.  That trend continued tonight, as the Reds beat the Bucs 9-5 in the first of a three game series at Great American Ballpark.

After the Reds took an early 2-0 lead, Stephenson struck out six straight Pirates to begin the game before issuing a leadoff walk to Francisco Cervelli to begin the third inning.  Later in the inning, Adam Frazier came to the plate with two outs and runners on first and second, delivering a RBI single to center to cut the lead to 2-1.

The Pirates tied the game in the top of the fourth on a double by John Jaso.  It appeared to be a relatively routine fly ball to center field but Billy Hamilton tripped over his own feet, allowing a run to score.  Pittsburgh loaded the bases later in the inning, but Nova grounded out to end the threat.

Cincinnati loaded the bases in the bottom of the fourth with no outs.  A single by Tucker Barnhart scored a run, and after striking out Stephenson and Hamilton, Nova’s wild pitch allowed another run to score, giving the Reds a 4-2 advantage. Two homeruns in the fifth inning increased it to a five run lead on Nova and the Bucs.

Pittsburgh loaded the bases in the top of the sixth, and Jose Osuna stepped to the plate with two outs.  But once again, they let a scoring opportunity slip away, as Osuna struck out to end the inning.

They finally broke through a bit and battled their way back in the top of the seventh.  After Frazier walked and Josh Harrison doubled, Josh Bell crushed a three run homerun to left center field, cutting the Reds lead to 7-5.  But Cincinnati responded immediately with two runs in the bottom of the inning, pushing the lead to four runs.

Despite being in the basement of the division virtually all season long, the Reds continue to have the Pirates number this year.  They really took it to the Bucs tonight, taking advantage of scoring opportunities, while Pittsburgh squandered multiple chances to keep this game close.  And when they did get that big hit on Bell’s homerun, they allowed the Reds to take two of those runs right back.  It’s difficult to watch right now for Pirates fans, as this team is incredibly inconsistent on a day to day basis from top to bottom.

The Pirates will give the ball to Gerrit Cole tomorrow evening against Luis Castillo for the Reds.  First pitch is scheduled for 6:40pm.