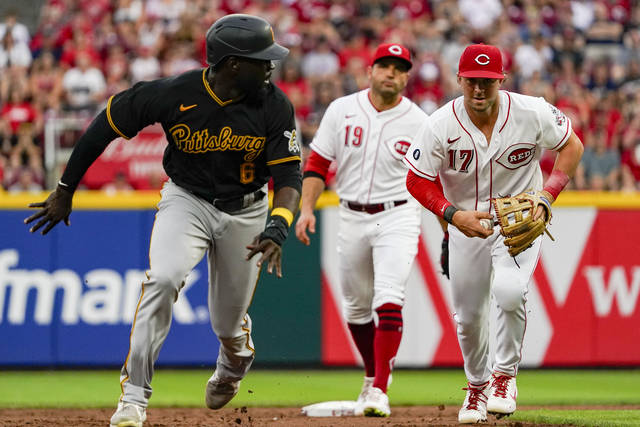 We all know that the Pittsburgh Pirates aren’t good, but through the first three games of this series with the Cincinnati Reds, they look downright awful.  Coming into tonight they had been outscored 17-4.  That margin grew even wider tonight after Cincinnati put an 11-3 beatdown on them.  The worst part is that these two teams still play ten more times in 2021.

Pittsburgh actually held the lead in this game at one point.  That would occur in the top of the third when Bryan Reynolds hit an RBI triple to right to bring home Ke’Bryan Hayes.  That lead would not last for long, as the Reds would plate three runs of their own in the bottom half of the inning.  Nick Castellanos would hit a solo homer in the fifth and Jess Winkler would come through with a two RBI single in the sixth to put Cincinnati up five.

The Pirates made a minor comeback in the eighth when Reynolds hit a two-run homer to center that traveled 410 ft.  The Reds were quick to answer once again as they would plate five runs in the bottom of the eighth.  Four of those five runs would come on home runs.

Mitch Keller made the start for Pittsburgh tonight and was not impressive.  He pitched five innings allowing four runs on seven hits with four strikeouts and four walks.  Keller would up his pitch count to 100, but averaging 20 pitches an inning isn’t anything to be proud about.  The overworked Pirates bullpen was hit hard once again.  Chasen Shreve allowed two runs on three hits over two innings, while striking out three.  Chris Stratton struck out one batter, but also walked one and gave up four runs on three hits during his third of an inning of work.  Nick Mears was tasked with collecting the final two outs of the ninth and in doing so gave up one run on one hit.

There are a little over eight weeks left in the regular season and games like these are going to be common for Pittsburgh against teams fighting for playoff berths.  There were a few roster moves today as Anthony Alford was recalled from Indianapolis, he would go 3-4 tonight, Philip Evans was sent down to Indianapolis, and Erick Gonzalez was designated for assignment.  This four-game series will finally come to an end tomorrow afternoon at 1:10pm.