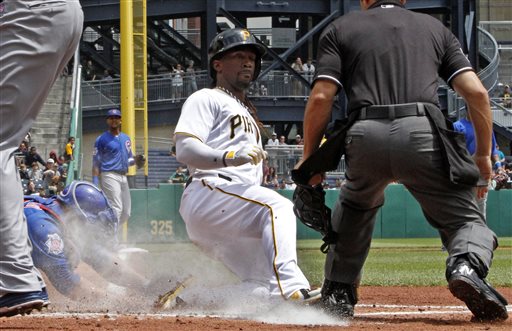 The Pittsburgh Pirates finished a ten game homestand today with a 4-2 victory over the Chicago Cubs.  The Buccos jumped out early on the Cubs, and while a rain delay silenced the offense, the bullpen managed to hold the lead to complete the series sweep.

Pittsburgh struck early on as two runs would cross the plate in the first inning.  Starling Marte led the game off with a single and then stole second base.  Andrew McCutchen drove in his first run of the game with a single to left.  Cutch would then swipe second and score on a Michael McKenry single.  The Pirates matched their two runs in the second inning with some two out magic.  Marte once again singled to lead off the inning and then was brought home on a Travis Snider trip trip triple.  With McCutchen up again he drove in Snider for the fourth and final run of the game for the Buccos.

Pitching looked good once again today for Pittsburgh as Jeanmar Gomez took the ball.  He pitched well during his short start as the rain delay would hold him to only 3.2 innings.  His final line was one run on three hits with two strikeouts.  With that short outing, it was up to the bullpen to hold the lead.

Vin Mazzaro picked up his third win of the year pitching 2.1 innings and allowing only two hits.  Jose Contreras and Justin Wilson pitched the seventh and eighth inning with Contreras allowing the second run of the game.  With a two run lead Jason Grilli pitched a 1-2-3 ninth to pick up his 19th save of the season.

It was a great 8-2 homestand for the Pirates who hope to carry that momentum onto the road for the next five games.  Up first will be three games with the Milwaukee Brewers.  Will this finally be the series where the Buccos snap that Miller Park curse?  Tune in tomorrow night at 8:10pm to find out.