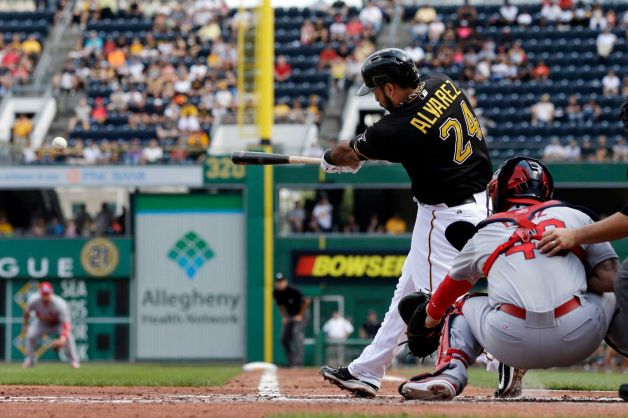 Entering this week’s series against the St. Louis Cardinals, the Pittsburgh Pirates weren’t playing their best baseball.  After all, they had lost three of their last four games, including a series loss to the Miami Marlins.  But the Bucs have returned home to PNC Park, and after today’s double-header sweep, they now have a game and a half lead in the N.L. Central division.

Game one of the doubleheader began at 4:05pm, and opposing pitchers A.J. Burnett and Lance Lynn pitched solidly for their teams.  Back to back doubles by Andrew McCutchen and Pedro Alvarez got the Pirates on the board in the first inning, and the Cardinals tied the game in the third one an RBI groundout by Matt Holliday.

From that moment on, though, both offenses struggled to muster a rally, as the bullpens did just enough to keep the other team from scoring.  In all, the Cards and Bucs used a total of 11 pitchers, who collectively gave up just 12 total hits.  The game remained tied 1-1 until the bottom of the 11th inning when, with two runners on, Alex Presley slapped a single, scoring Russell Martin from second, clinching a walk-off victory for the home team.  The Pirates occupied first place in the division by a half game with another matchup in just a half hour.

And for all the dramatics that game one had this afternoon, the second game of the doubleheader tonight at PNC Park was a sure thing for the Pirates.  McCutchen had a homerun and two RBI’s, and spot starter Brandon Cumpton tossed seven shutout innings as the Bucs beat up on the Cardinals, 6-0 to clinch the double-dip sweep.

The Pirates collected 11 hits on the night, while holding the Cards to just three.  Cutch, Gaby Sanchez, Jordy Mercer, and Josh Harrison each had two hits, as the bats came alive to put the game away midway through.  The capacity crowd was on their feet throughout the night, cheering on their Buccos, who now occupy a game and a half lead in the division.

Coming into the games today, most fans would have been delighted with a split.  To win both of these games, as well as the game last night, clinches a series victory with two games still remaining.  This is huge for this team, and with every win, they grow more confidence that they can compete with the best of the best down the stretch.

The Pirates and Cardinals will match back up tomorrow night for the fourth game of the series at PNC Park.  Adam Wainwright and Jeff Locke will oppose one another on the mound for the 7:05pm first pitch.