Pirates Swept Out Of Los Angeles 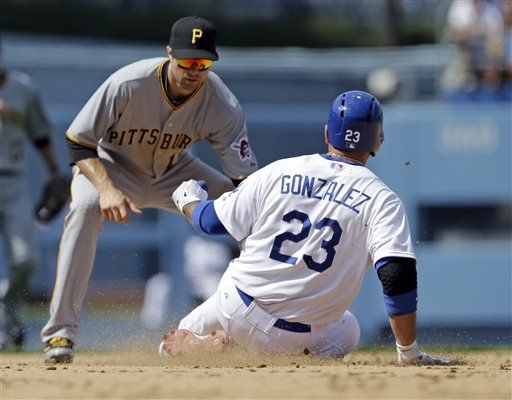 One week into the 2013 Major League Baseball season things have not been good to the Pittsburgh Pirates.  They entered today’s finale with the Los Angeles Dodgers 1-4 and on the verge of being swept in only their second series of the year.  In order to avoid that sweep they would need another game of solid pitching, strong defense, and an appearance by the offense.

Things got off to a good start for the Buccos as Andrew McCutchen would hit a two run home run in the first inning to give Pittsburgh its first lead of the series.  Unfortuantely, LA matched those two runs in the bottom half of the inning when Adrian Gonzalez singled in a pair of runs.

The Dodgers would collect two more runs off of Pirates starter Jeff Locke before he was pulled from the game after six innings.  He finished the day allowing four runs on eight hits, while striking out three and walking one.

While the Buccos offense was silent the rest of the day, Los Angeles would put up two more runs in the seventh inning off of reliever Chris Leroux.  The first run was a solo home run by Justin Sellers, which also happened to be his first hit of the season.  The final run was another Gonzalez single that scored Nick Punto.

It has been really disappointing to see Pittsburgh come out of the gate like this.  One can only hope that they get out of this funk soon so that we the fans can have some excitement before the calendar turns over to May.  Pittsburgh will look to get back on track starting tomorrow in the first of three games with the Arizona Diamondbacks.  Wandy Rodriguez will start for the Pirates, while the D-Backs will use Trevor Cahill.  First pitch is scheduled for 9:40pm.