Pirates Swept Out Of St. Louis In Blowout Fashion 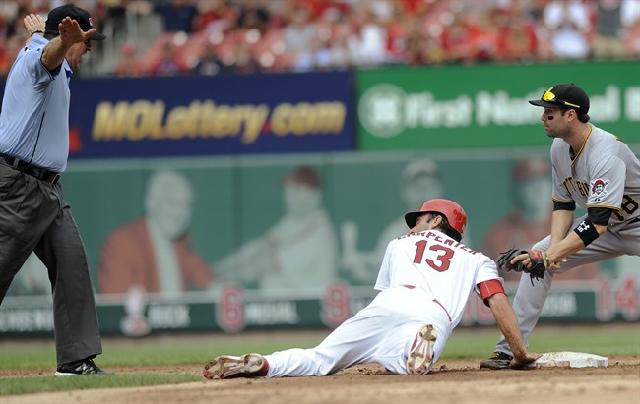 Well this has been a weekend to forget for the Pittsburgh Pirates.  After entering this series against the St. Louis Cardinals with a game and a half lead in the N.L. Central, the Bucs were completely outplayed in every facet of the game for three consecutive days, falling into second place, a game and a half behind the now first place Cards.

Today’s game was similar to the previous two…the Cardinals took the lead early and never gave the Pirates a chance to get back into the game.  Charlie Morton was the latest victim of the St. Louis juggernaut offense, as the Cards completed the series sweep with a 9-2 victory over the Bucs at Busch Stadium this afternoon.

St. Louis scored two in the first inning, three in the third, and four more in the fifth, putting the game completely out of reach midway through the game.  Morton fell to 7-4 on the season after giving up five runs on six hits through 1.2 innings before leaving with an undisclosed injury.  Pittsburgh used a total of six pitchers, including Stolmy Pimentel and Vin Mazzaro, who each gave up two runs in relief.

The Cardinals totaled twelve hits against Pirates pitching, while Pittsburgh managed only two hits before a ninth inning that saw their bench players muster together a couple runs.  At the end of the game, it was another lopsided loss to the Cardinals for a Pirates team who entered the weekend eager to distance themselves atop the division.

The Pirates were outscored, 26-10 in the three game series this weekend.  They were outplayed in every facet of the game.  You can’t give up 26 runs in three game and expect to win; similarly, you can’t score 10 runs in three games and expect to win.  This was a game (and series) that the Pirates have to wash their hands of and forget about it.  They need to move on mentally and immediately focus on a huge interleague series beginning tomorrow in Arlington against the Texas Rangers.