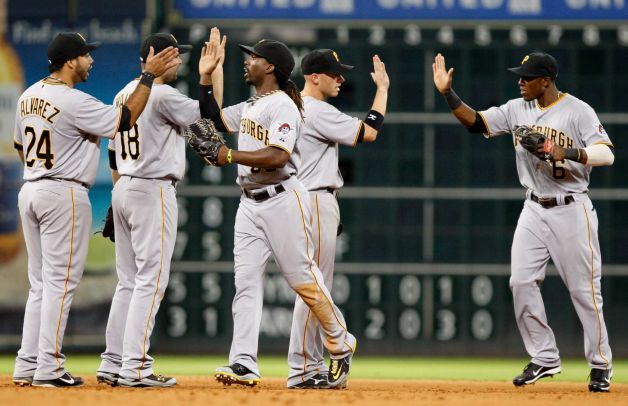 There are no style points for how a team wins.  A win is a win and that is what has kept this surprise season for the Pittsburgh Pirates rolling.  The Houston Astros are a bad baseball team, and while it may be nice for our Buccos to blow them out once in a while, a 4-3 win tonight keeps them right on the tail of the Cincinnati Reds and atop the Wild Card race.

Wandy Rodriguez made his debut in a Pittsburgh uniform tonight and it went alright.  he pitched six innings, allowing three runs on six hits, with five strikeouts and walks.  We all hope for better nights than this, but he kept the Pirates in the game and lets face it, the Astros would have the best scouting report on him.

The bullpen shut down any chance Houston had of taking this one.  Chris Resop picked up his first win of the season by pitching the seventh inning.  Brad Lincoln had a short night of work by his standards and picked up his fifth hold.  That led to the grill being fired up as Jason Grilli picked up his second save of the year.

The offense showed power again tonight.  It all started in the first inning as Alex Presley homered for the second night in a row.  The game was tied at one until the fourth inning when Neil Walker hit his tenth homer of the year to give the Buccos a one run lead.

The Stros took the lead in the fifth on a Justin Maxwell triple that scored two runs.  That lead would be short lived.  For the second night in a row Houston let a ball get by the catcher and this time it would bring in Garrett Jones to tie it at three.  The last run came in the eighth as Rod Barajas hit an RBI single to deliver the final blow for the win.

The Pirates have won four straight and nine of their last eleven since that 1-3 post All-Star game start to the second half. Pittsburghis doing what they should against a bad team and to keep it simple that is WIN!  Now they go for their second s….. of the month over the Astros tomorrow at 2:05.