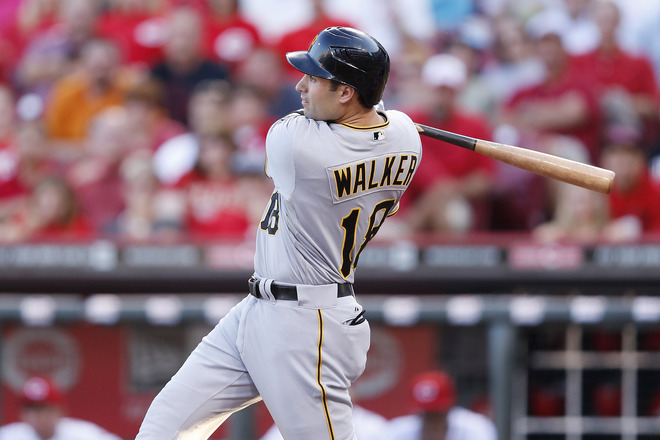 Tonight’s game between the Pittsburgh Pirates and Cincinnati Reds resembled a match from the French Open, because it was back and forth all night and it even took an extra frame.  In the end though, it was our Battlin’ Buccos who came out on top with a 5-4 victory.  The Pirates have posted a 9-3 record over their past four series and see themselves only two games out of first place behind the division leading Reds.

Cincinnatijumped on the board first when Jay Bruce hit a solo home run to centerfield.  Pittsburgh would then jump out on top with two runs in the fourth.  Neil Walker would double home Alex Presley to tie the game.  After a single by Andrew McCutchen moved Walker to third, he would score on a sacrifice fly by Garrett Jones.

The Reds then tied the game when Ryan Ludwick hit his first homer of the night, this one a solo shot to the second deck in left field.  Jones then gave the Pirates the lead again with a RBI single to left in the top part of the sixth.  Cincinnati would answer once again in the bottom part of the inning on a RBI single by Bruce that scored Joey Votto.

That run would mark the end of the line for Kevin Correia, who would go five innings allowing three runs on eight hits, while striking out four and walking one batter.  Another so-so start for Correia, but he kept the team in the game and with the way he has pitched since the second half of last season, that is all we can ask for.

The Buccos took back in the lead in the top of the seventh on a Michael McKenry sacrifice fly that would score Jose Tabata.  Cincinnati starter Mike Leake would leave after the seventh inning.  He would allow four runs on seven hits while striking out five batters.

Pittsburghwould carry a 4-3 into the bottom part of the ninth, which is usually game over when Joel Hanrahan is handed the ball.  Unfortunately “The Hammer” would blow his third save of the year when Ludwick hit his second solo homer of the night.  The Reds would counter with their lights out closer Aroldis Chapman, who at the time had not allowed a run all year.  That would change when Clint Barmes scored on a McKenry double.  Chris Resop was handed the ball in the bottom part of the tenth, where he closed out the game and earned his first save of the year.

Big win tonight for the Buccos, as they took another series from the Reds and moved a game closer to first place.  It was also great to see a complete team effort tonight in the win.  Pittsburghwill head back to PNC Park tomorrow for a short three game interleague series home stand with the Kansas City Royals.  Erik Bedard will head to the bump for the Pirates, while the Royals will counter with Luke Hochevar.  Hochever is 3-6 this year with a 6.63 ERA.  HopefullyPittsburgh can get to him early and let Bedard work some stress free innings.