Pirates Take Game Two Of Doubleheader And Series From Rockies 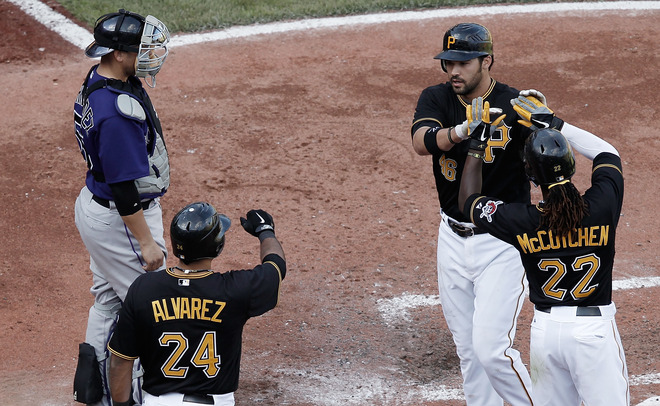 All it took was one big inning from the offense and a solid pitching performance by Charlie Morton for the Pittsburgh Pirates to earn a 5-1 win over the Colorado Rockies.  Game one of this doubleheader was another wasted pitching performance and through four innings of game two, things did not look much different.

Someone in the clubhouse must have flipped a switch when the fifth inning started.  With one out Alex Presley would double and then score when Nate McLouth traded places with him.  McLouth would then score on an Andrew McCutchen single.  Then the power surge really kicked in.  Garrett Jones would hit a two run homer to right centerfield.  This was followed by Pedro Alvarez’s second long ball of the day to cap a five run fifth inning.  G.I., Pedro, and Clint Barmes all performed well at the plate today.  Jones had three hits in four at bats, while Alvarez and Barmes would each go 2-4.

Pitching was once again stellar for the Buccos.  Morton would last seven innings allowing one run on six hits while striking out two and walking one batter.  The lone run came in the seventh on a solo home run by Ramon Hernandez.  Brad Lincoln would come out of the pen for the final two innings and strike out two batters.

The Pirates performance was better this series than any other series this season.  In three games they scored eleven runs on thirty one hits.  Now the key is to turn those hits into big innings, so that the pitching staff can have some breathing room.  After finishing this homestand 3-3, the Buccos are back on the road for seven games after a day off on Thursday.  The first part of their road trip will feature four games with the Atlanta Braves.  A.J. Burnett is scheduled to start for Pittsburgh, while Atlanta will counter with Tommy Hanson.  First pitch on Friday is 7:35.