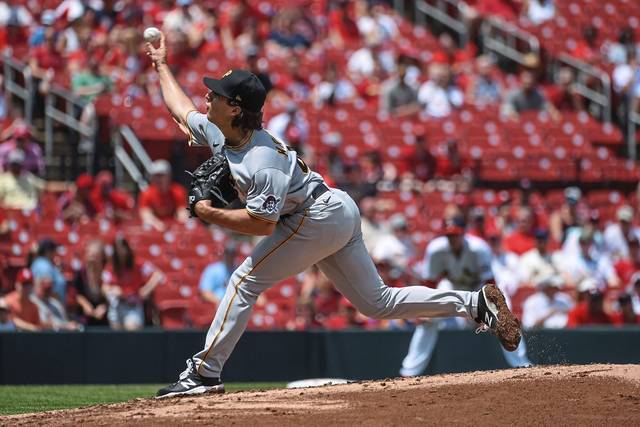 The Pittsburgh Pirates completed a four game weekend series against the St. Louis Cardinals today by taking three of the four games after winning this afternoon 7-2.  Road games have been very tough on Pittsburgh this season, so to take a series at Busch Stadium is big because it is against a division foe and they lost their first five games against St. Louis in 2021.

Max Kranick made his Major League debut today for the Pirates and was great during his five innings on the mound.  He would have a perfect game going with three strikeouts prior to a rain delay causing him to exit early.  Since he got through those five innings, he was able to earn his first big league win as well.  He did have some help from his defense, especially when Ke’Bryan Hayes made an amazing across diamond throw in the second inning to rob Yadier Molina of a hit.

Cardinals starter Johan Oviedo had a rough start and that allowed Pittsburgh to get out to a big lead.  Oviedo lasted only four innings and during that time gave up five runs on six hits with four walks and five strikeouts.  Bryan Reynolds started the scoring with an RBI single to left center.  The Pirates doubled their lead when Hayes scored on a passed ball.  The third run of the inning came when Ben Gamel drew a bases loaded walk.

Pittsburgh would add two more runs in the fourth inning.  Gamel would cross the plate on a Hayes infield single, and the second run happened on another Reynolds RBI single.  The long ball would come in to play when the Pirates scored their final two runs of the day in the fifth inning.  Gregory Polanco and Gamel would connect on solo home runs to give Pittsburgh a seven-run lead.

After the rain delay, Duane Underwood Jr. would pitch three innings allowing two runs on three hits with three strikeouts and one walk.  The first run allowed came in the seventh on a Nolan Arenado sac fly to center.  St. Louis plated their final run of the day in the eighth with a Paul DeJong RBI single to left center.  David Bednar pitched a scoreless ninth and walked one batter.

Anytime the Pirates can take three of four in a series it is big.  Doing it on the road against a division opponent shows that this team is capable of playing good baseball when they capitalize on their opponents’ mistakes.  This road trip will continue tomorrow evening when Pittsburgh will head further west for the first of three against the Colorado Rockies.  First pitch is set for 5:10pm.